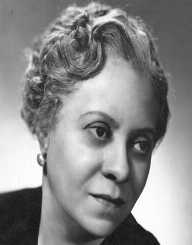 Florence Price was born on April 9, 1887. She was an African American classical composer. Florence is renowned for being the first African American to be a Symphonic composer as well as the first to have her composition played by a major Orchestra. She died at the age of Forty-Eight years.

Florence Price was born Florence Beatrice Smith on April 9, 1887, in Little Rock, Arkansas, United States of America. She was born to Florence Gulliver and James H. Smith. She was brought up alongside two siblings. In 1891, she had her very first piano performance. In 1898, she published her first composition. She later joined Capitol High School.

In 1901, she graduated. She, later on, joined New England Conservatory of Music where she majored in piano and organ. She made compositions alongside George Chadwick and Frederick Converse. It was at this juncture that she wrote her very first symphony and string trio. In 1906, she graduated.

Florence Price started her career as a teacher at Arkansas. In 1910, she moved to Atlanta, Georgia. She later became Clark Atlanta University’s music department head. In 1912, she went back to Little Rock alongside his newly wedded husband. In 1927, she moved to Chicago. She later studied orchestration, composition, and organ.

In 1928, she published four pieces of the piano. She later enrolled and studied languages, music and liberal arts in various institutions including Chicago Musical College, Chicago Teacher’s College, American Conservatory of music and the University of Chicago. In 1931, she started working as an organist for silent film screenings and also composed songs for radio ads.

In 1932, she published her first orchestral work ‘Symphony No. 1 in E Minor’ followed by ‘Ethiopia’s Shadow in America.’

Florence Price's piano works included ‘Sonata,’ ‘Dances in the Canebrakes,’ ‘3 Little Negro Dances’, ‘At the Cotton Gin’ and ‘Dance of the Cotton Blossoms.’ She later did an arrangement for spiritual works which included ‘My Soul’s been anchored in de Lord,’ ‘I am Bound for the Kingdom,’ ‘Nobody Knows the trouble I see,’ ‘Save me, Lord, Save me’ and 'Trouble done come my way’ among others.

In 1933, Florence Price was declared the first-ever African American Symphonic composer. In 1940, she was inducted into the American Society of Composers, Authors, and Publishers.

In 1912, Florence Price married Thomas J. Price with whom she had two children. In 1931, they divorced. She died of a stroke on June 3, 1953, in Chicago, Illinois, United States of America. She died at the age of Forty-eight years old.