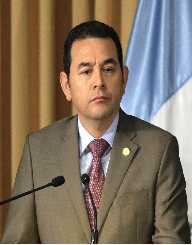 Nicanor Duarte went to study at university, and in 1974 obtained a bachelor’s degree in Sciences and Letters. He worked as a sports reporter, radio host, and columnist. Besides sports, Duarte mostly covered social and political issues. In 1984, Duarte completed law studies at the Catholic University of Asuncion. In 1989, he received a doctorate from the National University of Asuncion. He continued his academic studies, and in 1992 received a postgraduate degree in Political Science from the National University and Hans Seidel Foundation.

After finishing his academic studies, Nicanor Duarte joined the ruling Colorado party. In 1992, the preliminary candidate for Colorado’s was the minister of Integration Juan Carlos Wasmosy Monti. He became the president of Paraguay in 1993 and appointed Duarte as his Minister of Education and Culture. Following some political controversy in 1996, Duarte left the Colorado party and the following year joined the ReconciliacionColorada Movement.

In 2001, Nicanor Duarte again joined the ruling Colorado Party and became its president from 2001 until 2004. In 2002, he became the presidential nominee from the party and won the election with 37.1% of the votes. On August 15, 2003, Duarte became the President of Paraguay for the 2003-2008 term. During his presidency, Duarte issued more left-wing policies and opposed free trade. He also reached out to regional Latin American countries with left-wing governments. He was also promising to fight corruption and look into many corruption scandals, as well as protect the country from its historic debt.

On August 26, an extraordinary session of Congress was called, but many MP’s left the session to protest. Nevertheless, Nicanor Duarte was sworn in as the senator. On September 4, the Paraguayan Senate discussed his tenure as senator and approved a final bill with some modifications. This meant that Jorge Cespedes was confirmed as titular Senator, instead of Duarte, who was confirmed as a non-voting senator for the life-a position held by previous presidents.

In 2013, Nicanor Duarte became the appointed Ambassador of Paraguay to the Republic of Argentina. He is married to Maria Gloria Penayo Solaeche, with whom he has six children.