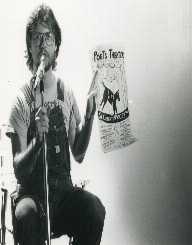 'An African-American poet of exceptional calibre, Lorenzo Thomas is well known for his honest writings and as an associate of the young black poets’ group called the Umbra.

Lorenzo Thomas wrote extensively on civil rights, culture, and music of his times.

Lorenzo Thomas was born on Aug 31, 1944. His parents were Afro-Caribbean. His father was a pharmacist, and his mother was a community activist. When Thomas was quite young, the family shifted to New York.

Lorenzo Thomas changed schools often. He finally graduated from the Andrew Jackson High School. As a child, he was teased by fellow students for his native Spanish, but soon he mastered English. For college education, Thomas went to the Queens College in New York. He passed with a B.A. degree in literature. He also went to the Pratt Institute.

Lorenzo Thomas' career as a poet began while he was a student at the Queens College. As a poet and a critic, his work mainly focused on presenting the cultural prejudices of the America of the 60’s in a harsh yet humorous way.

Lorenzo Thomas became an active member of the Umbra Workshop and wrote about culture, movies & social structure of that era. The workshop also brought him into contact with many young black poets, who had quite a literary influence on Thomas himself.

While at Umbra, Lorenzo Thomas became an active participant in the Black Arts Movement. His work promoted the African-American artistry.

Lorenzo Thomas joined the Navy in 1968 as a radioman. He worked in different positions which included military advisor, master-at-arms, computer operator and platoon leader. He provided his services in Vietnam. Finally, in 1972 after getting discharged from military service, he focused full-time on writing.

Lorenzo Thomas' early literary works included A Visible Land, Fit Music & Dracula. In 1973, he joined the Texas Southern University as a writer and continued to work there till 1979. In 1979 he published his famous work Chances are Few. The Bathers followed in 1981. He wrote many poems during this period. An extensive collection of those has the racial discrimination against the blacks as their main subject. His other literary works included book reviews and articles for various journals like the Living Blues.

In 2000, Lorenzo Thomas analysed the works of Amiri Baraka and James Fenton in his book Extraordinary Measures: Afrocentric Modernism and the Twentieth Century American Poetry. Don’t Deny My Name was published in 2008, three years after his death.

Lorenzo Thomas was the recipient of several awards. This included the Dwight L. Durling Prize in Poetry and the John Golden Award for creative writing.
In 1974, he was awarded the Poets Foundation award and the Lucille Medwick award.

Lorenzo Thomas died on July 4, 2005, at the Texas Medical Centre, Hospice. He was sixty years of age and suffering from emphysema, a lung disease.