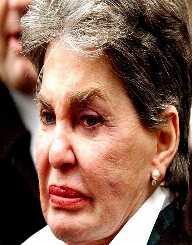 Leona Helmsley was born 4th July 1920, to Morris and Ida Rosenthal. She was born in Marbletown, New York, in the United States. Her family often moved when she was a youngster, but they finally settled in Manhattan.

Leona Helmsley attended Abraham Lincoln High School, but she dropped out to try her luck in business. She changed her name several times, finally sticking with Leona Mindy Roberts.

In 1964, Leona Helmsley entered the world of real estate. She was hired by Abe Hirschfeld to sell apartments at 925 Park Avenue, New York.

In 1968 she met Harry Helmsley, her future husband. He was a multi-millionaire, but Helmsley was a millionaire herself by this time. She joined one of his brokerage companies in 1970 as the senior vice-president.

Her marriage to Harry in 1972 was very timely, as she had been sued in 1971 by several of her tenants and they had won the case. She not only had to compensate her tenants, but she also had to give them three-year leases. On top of this, her real estate license had been suspended.

Leona Helmsley decided to turn her attention to running her husband’s hotel empire.

The couple built a real estate empire between them in New York City. Properties included the Empire State Building, 230 Park Avenue, and a complex on the East Side of Manhattan. They also built a hotel empire, including Park Lane Hotel, The New York Helmsley Hotel, and the Helmsley Palace Hotel. Helmsley had at least 23 hotels under her direct management by the end of 1988.

Leona Helmsley became known as a nasty piece of work. She commonly yelled insults at her employees and swore at them. When her son died, his wife was evicted from the Helmsley property she was living in.

The Helmsleys had a net w orth of over $1 billion, but they were known for non-payment and disputing payments to contractors and other vendors.

In 1983, the Helmsleys purchased a mansion for $11 million and spent another $8 million having it refurbished and restored.

They didn’t want to pay the $8 million, and the contractors sued them for non-payment. Although they paid most of the money, the damage had been done. The contractors sent copies of their falsified invoices to the New York Post, who did a story on the Helmsleys trying to avoid paying tax.

They were breaking the law by having the invoices made out to their company as business expenses. Eventually, they were indicted on tax-related charges. Harry’s health declined rapidly, and he was ruled unfit to stand trial. Leona Helmsley would face the charges by herself.

Leona Helmsley was convicted on several charges. These included three counts of tax evasion, three of filing false personal tax return, and 16 counts of assisting in the filing of false corporate and partnership tax returns. There were also ten counts of mail fraud.

She was sentenced to 16 years in prison, but eventually, all but eight of the charges were dropped, resulting in a significantly reduced prison term. Ultimately, she only served 19 months.

Leona Helmsley’s first marriage was to Leo Panzirer, an attorney, in 1938. They had a son in 1940, and the couple divorced in 1952. Her second husband was Joseph Lubin, who she married and divorced twice.

In 1972, she married Harry Helmsley and was still with him at his death in 1997. After Harry died, Helmsley became somewhat of a recluse. He left his entire fortune to her, and her net worth was estimated to be well over $5 billion.

New York doesn’t allow convicted felons to hold liquor licenses, so Leona Helmsley lost control of her hotels as most of them had bars. Despite her nasty reputation, Leona Helmsley was generous in her contributions to charity. After September 11, she donated $5 million to help families of the New York City firefighters and police.

She also contributed $25 million to the Presbyterian Hospital in New York for medical research.

After her death, most of Leona Helmsley’s wealth was left to the Leona M. and Harry B. Helmsley Charitable Trust. The rest was distributed amongst her family.