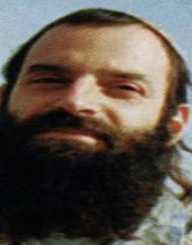 Baruch  Goldstein was an American-Israeli physician and religious extremist. Born on December 9, 1956, he was involved in the 1994 Cave of the Patriarchs massacre in Hebron that saw the murdering of 29 Palestinian Muslims and injuring 125. Those who survived this massacre in return beat Goldstein to death after the massacre. The Israeli government vehemently condemned the massacre, issued arrest of the followers of Meir Kahane, and blacklisted the Kach movement and all its affiliates as terrorist groups. The government also barred some Israeli settlers from entering some Palestinian towns and demanded that army-issued rifles be returned, and Jewish Israelis were barred from entering major Arab communities in Hebron.

On the other side, the government also ejected Palestinians from some streets near Jewish settlements in Hebron, including, the Al-Shuhada Street. Goldstein’s burial place became a pilgrimage site for Jewish extremist until an Israeli legislation outlawing monuments to terrorists in 1999 was passed. The Israeli army, therefore, pulled down the shrine built on the Goldstein burial site, but his tombstone, which had the inscription referring him as a martyr was left untouched.

Baruch  Goldstein was born on December 9, 1956, in Brooklyn New York in an Orthodox Jewish family. He received his education from the Yeshiva of Flatbush religious day school. After his graduation, Baruch  Goldstein enrolled at Yeshiva University graduating with a medical degree at the Albert Einstein College of Medicine. Baruch  Goldstein was a member of the Jewish Defence League, a Jewish militant group formed by his childhood friend Meir Kahane.

Baruch  Goldstein left the United States for Israel in 1983. While there, he served in the Israel Defence Forces (IDF) as a physician starting as a recruit and later in the reserve forces. After his service in the forces, he lived in the Israeli settlement of Kiryat Arba near Hebron where Baruch  Goldstein also worked as a physician. Baruch  Goldstein practiced as an emergency doctor for victims involved in Arab-Israeli violence. According to the reports in Israel, Goldstein always refused to treat Arabs even those in the Israel Defence Forces with believing that it was against the Jewish laws to treat non-Jews. As an active member of the Kanane Kach party, he was third on the party list for the Knesset at the 1984 election.

On the Purim day of February 25, 1994, Baruch  Goldstein dressed in wearing "his army uniform with the insignia of rank, creating the image of a reserve officer on active duty" entered a room in the Cave of the Patriarchs serving as a mosque. While there, Baruch  Goldstein opened fire on the worshippers killing 29 of them and injuring more than 125 of them. According to accounts by mosque guard Mohammed Suleiman Abu Saleh, Baruch  Goldstein believed Baruch  Goldstein wanted to kill as many as possible per the "bodies and blood everywhere".

Baruch  Goldstein was eventually overpowered by other survivors and beaten to death. After the massacre, some Palestinians protested resulting in a riot between them and the Israel Defence Forces of which 25 Palestinians and five Israelis were killed. The Israeli government imposed a two-week curfew on the 120,000 Palestinian residents of Hebron after Theriot, while the about 400 Jewish settlers were allowed to move freely. The Israeli Prime Minister Yitzhak Rabin the called him the Palestinian Liberation Organisation Leader, Yasser Arafat, to share his regret for the incident calling is "loathsome, criminal act of murder".

The Israeli government also publicly condemned the murder and followed it with an arrest on followers of Meir Kahane. It also barred some settlers from entering Arab towns and ordered them to return their army-issued rifles but rejected Palestinian Liberation Organisation’s demand to disarm settlers and the creation of an international forces to protect Palestinians. Many Israelis and mainstream Orthodox described Goldstein act as insane.

As the Jewish community disowned Baruch  Goldstein, he was not allowed to be buried in a Jewish cemetery but buried at the Meir Kahane Memorial Park in Kiryat Arba. His gravesite was since made a pilgrimage site by Jewish extremists with a plaque near his grave reading, "To the holy Baruch Goldstein, who gave his life for the Jewish people, the Torah, and the nation of Israel." As 2000 about 10,000 people had visited the site and turned into a shrine. The Labour Party and Israeli security raised concerns in1 996 that the site was promoting extremism.

In 1999, a law was enacted that forbid raising monuments for terrorists and a subsequent Supreme Court ruling empowered the Israeli Army to pull down the shrine and prayer area site at the graveyard. The new tomb built for him is still visited by Jewish pilgrims. Some Jew extremist see Goldstein as an idol and during his funeral Rabbi Yaacov Perrin stated that even a million Arabs are "not worth a Jewish fingernail."  A teacher at the Jerusalem College Samuel Hacohen, eulogised Goldstein as the "greatest Jew alive, not in one way, but in every way", and stated "the only one who could do it, the only one who was 100 percent perfect" and Rabbi Dov Lior of the Kiryat Arba declaring him as "holier than all the martyrs of the Holocaust". Several others have praised this horrific act as a divine activity.