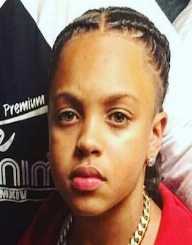 Luis Rivera Jr. was born on the 15 February 2003 at Brockton Hospital in Brockton, Massachusetts. His parents Luis Rivera and Jatoy Rivera.

Going by the handle of Lil Poopy, this young rapper made a music video of French Montana’s Pop That. It went viral in 2016, and this brought him to prominence on the rap music scene. He featured in the reality series The Rap Game.

In 2016, Lil Poopy signed a four-year contract with Sony-Epic label. The label includes artists such and Jennifer Lopez and P. Diddy. He has a Twitter presence: @poopythedon, with 23.6K followers.

There has been a criticism of the content of the young rapper’s songs including references to cocaine. One music video was removed from youtube.com because of sexual references and referred to child services. The family’s lawyer, Joseph Krowski scoffed at the accusations of any impropriety and said that Rivera is a good, talented kid, who if anything was spoofing adult rap video.