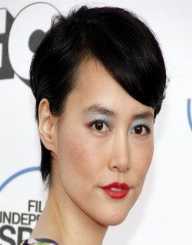 Making an acting debut in 1999 with the film Will to Live, Kikuchi has appeared in several other films including Assault Girls, 2009, Shanghai, 2009, Norwegian Wood, 2010, Love Strikes!, 2011 and Pacific Rim in 2013. Kikuchi appeared in the drama Film Kumiko, the Treasure Hunter, 2014 for which she received a nomination for Best Female Lead at the Independent Award.

Rinko Kikuchi was born on January 16, 1981, in Hadano, Kanagawa in Japan. She is the youngest of three children by her parents. A talent agent discovered her extraordinary talent when she was 15 years.

Rinko Kikuchi made a professional film debut at age 18 appearing in Kaneto Shindo’s Will to Live in 1999. She since played some minor roles in films like By Player, 200o, Akai Shibafu, 2000 and Paradise, 2001. Kikuchi had her most significant break in Kazuyoshi Komori's Sora no Ana (Hole in the Sky), 2001. The film initially released September 29, 2001, also starred Susumu Terajima, Ryo Kase and Bunmei Tobayama. It featured at numerous international film festivals including the Rotterdam Film Festival.

After Hole in the Sky, Rinko Kikuchi starred in Drug, 2001 as Mai and Age 17:17-sai in 2003. Kikuchi played as herself in the Katsuhito Ishii film, The Taste of Tea in 2004. Kikuchi became famous with the role of Chieko Wzataya in the movie Babel, 2006, directed by Alejandro González Iñárritu. She received several awards and earned a nomination for Best Supporting Actress at the Academy Awards. She received awards like the National Board Review Award for Best Breakthrough Female Performance and the Gotham Award for Breakthrough Actor. In 2008, she appeared in The Sky Crawlers and followed it with Assault Girls, 2009. The later was her first full English language film.

Rinko Kikuchi played the role of Naoko in Norwegian Wood, 2010 an adaptation of Haruki Murakami’s novel of the same name and directed by Tran Anh Hung. The following year, she starred in 47 Ronin, which was the first English adaptation of the Chushingura legend, Japan's most famous tale of samurai loyalty and revenge. She has starred in several other films including Pacific Rim, 2013, Kumiko, the Treasure Hunter, 2014, and also cast in the season two of the HBO sci-fi series, Westworld.

Rinko Kikuchi and Japanese actor Sh?ta Sometani married on December 31, 2004. The couple had their first child in 2016.

Rinko Kikuchi has received several awards including the Breakthrough Award and Best Ensemble Cast at the 2006 Gotham Awards for the film Babel. She won the Best Breakthrough Performance – Female by the National Board of Review, 2006 and Best Supporting Award by the Austin Films Critics Association.