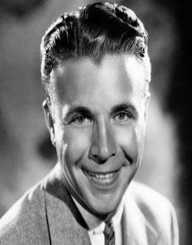 Richard Ewing Powell was an American actor, singer, film director, and producer. Born on November 14, 1904, he started a career as a singer before going into acting and filmmaking. He made an acting debut in the film Blessed Event, 1932, and became known for playing romantic roles. He later gained fame through performing in musical comedy.

He appeared in several films including The King’s Vacation, 1933, 42nd Street, 1933, Gold Digger, Shipmates Forever, 1935, I want a Divorce, 1940, and Murder, My Sweet among several others. Powell became the first actor to play private detective Philip Marlowe in a film.

Richard Ewing Powell was born on November 14, 1904, in Mountain View in northern Arkansas. At the age of ten, the family moved to Little Rock. Having a great passion for singing at a very young age, Powell started singing in church choirs and local orchestra in Little Rock. He later formed a band. He received education at Little Rock College.

Dick Powell started his singing career by joining the Royal Peacock Band after graduating from college. The band embarked on several tours throughout the Midwest. He later joined the Indianapolis based Charlie Davis Orchestra. He recorded with Davis for the Vocalion Record. Powell came to the limelight in Pittsburgh, where he worked as the Master of Ceremonies at the Stanley Theater and Enright Theater.

Warner Bros offered Dick Powell a film contract in 1932. His debut film role was in Blessed Event, as a singing bandleader. That same year, Fox borrowed him to play a supporting role in Too Busy to Work, starring Will Rogers. In 1933, he played a supporting role in The King’s Vacation and 42nd Street all for Warner. The later was a huge success and Powell reprised the role in Gold Digger, which was also a hit. That same year, he also appeared in Footlight Parade, starring Keeler and James Cagney and was a huge success. His works for Warner include Happiness Ahead, Broadway Gondolier, A Midsummer Night’s Dream, Gold Diggers of 1937, Hollywood Hotel and Naughty but Nice among others.

Dick Powell left Warner for Paramount due to the repetitive nature of his roles. At Paramount he played alongside Joan Blondell in the musical I Want a Divorce, 1940. That same year, he appeared in Preston Sturges’ non-musical Christmas in July. He played a supportive role in In the Navy, 1941 starring Abbott and Costello and followed it with Star Spangled Rhythm, 1943, It Happened Tomorrow, 1944, and Meet the People, 1944.

Dick Powell ventured into film directing in the 1950s. His debut feature film was Split Second, 1953 and followed it with The Conqueror, 1956, starring Genghis Khan and John Wayne. He directed You Can’t Run Away From It starring Jack Lemmon. Powell directed war films like The Enemy Below, 1957 and The Hunters, 1958 alongside Robert Mitchum.

Dick Powell married three times first model Mildred Maund in 1925. The couple divorced after two years of marriage. His second marriage was to Joan Blondell. Joan came into the marriage with a son Norman Powell from her previous marriage. They also had a daughter, Ellen Powell. Powell married June Allyson on August 19, 1945. They adopted a daughter Pamela and had a son Richard Powell, Jr. Powell was diagnosed with cancer and revealed on September 27, 1962, that he was undergoing treatment.

He died on January 2, 1963, at age 58 and his remains cremated and buried in the Columbarium of Honor at Forest Lawn Memorial Park in Glendale, California. It is believed that Powell contracted his cancer while shooting the film The Conqueror. It was filmed at St. George, Utah, close to a site used by the U.S. military for nuclear testing. Aside from Powell, actors who starred in the film including Susan Hayward and John Wayne were also diagnosed with cancer. Out of the total 220 crew, 91 developed some form of cancer.