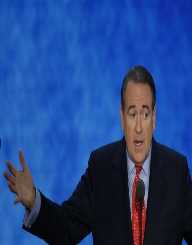 American political and commentator Mike Huckabee was born on the 24 August 1955 in Hope, Arkansas to Mae Elder and Dorsey Wiles Huckabee. He was born into a working-class family from a colonial English, German, Scottish and Irish background.

He attended Hope High School where he was active in school politics and was vice-president of the student council (1971-1972). In the early 1970s, he began a ministry at the Garrett Memorial Baptist Church and graduated from Ouachita Baptist University with a B.A. in religious studies (1978). He then spent a year at the Southwestern Baptist Theological Seminary, Fort Worth, Texas.

Mike Huckabee started his work in the media by working in Christian broadcasting when he joined the staff of television evangelist James Robison. He worked for television stations in Texarkana and Pine Bluff doing various documentaries. Huckabee was the 44th Governor of Arkansas (1996-2007) and also stood as a candidate in the Republican presidential primaries in 2008 as well as 2016.

As well as his work in the media, Huckabee is a published author with some bestselling books.

In 2005, Governing Magazine named Mike Huckabee one of the magazine’s Public Officials of the Year.  Time Magazine also nominated him as one of the five best governors in America.

From 1980-1986 he was a pastor at the Immanuel Baptist Church, Pine Bluff, Arkansas and then from 1986 until 1992 he was at the Beech Street First Baptist Church, Texarkana. He was president of the Arkansas Baptist State Convention between 1989-1991.

Mike Huckabee has long been involved in advocating for the arts in education. One of his initiatives has been to provide musical instruments for students.