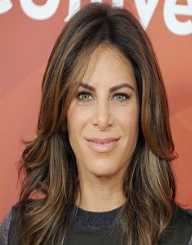 Jillian Michaels was born on February 18th, 1974 in Los Angeles, California. She got high acclaim for being part of the famous fitness show called The Biggest Loser. Here, she featured as the strength coach for the show’s participants. Being a fitness guru, she has some tutorial video workout series. In addition to this, Michaels is a proud owner of her clothing line. As an author, she has released several books including Master Your Metabolism, Unlimited and several others.

At the time of her birth on February 18th, 1974, Jillian Michaels was given the name Jillian Leigh McKarus. Her mother’s name was Jo Ann McKarus. She was left to raise young Michaels on her own after she separated with her husband. The divorce of her parents left Michaels devastated, and it affected her youthful years. She also endured verbal abuse from her classmates. She later went for her university education at California State University located in Northridge. At this time, she worked as a bartender to ensure that she could fully support herself. Also, she was a personal trainer who earned her some money.

After her graduation from the university, Jillian Michaels worked as an agent for International Creative Management which is situated in Los Angeles. She did not waste time here as she quit her job to engage in her training career. In 2002, she managed to open her fitness facility called Sky Sport & Spa. She partnered with Jackie Warner in opening this fitness facility.

Three years down the line, her big break came after being cast as the physical trainer for the NBC fitness show dubbed The Biggest Loser. This was a show featuring overweight individuals competing against each other to lose the most weight within a specified period. Michaels’ role as a trainer on the show earned her recognition for being a tough trainer who did not hesitate from using fear as one of her motivational tactics. The show has been a major success as it has been aired for 17 seasons. Michaels has featured in more than ten seasons earning her a nationwide reputation as a fitness prowess.

After running a successful fitness show on NBC, Jillian Michaels soon started her very own fitness show in 2010. This show is called Losing It With Jillian. The show is different in the sense that every episode, Michaels gets to live with different families for a week long and educating them on how to manage their unhealthy lifestyles. A year later, she was cast as a co-host in the show The Doctors by CBS. She only played her part for half a season before leaving in 2012.

Jillian Michaels is involved in a romantic relationship with a woman named Heidi Rhoades. They got engaged together. She has two siblings. One was a daughter that she adopted from Haiti. The other is her son whom she gave birth to. Her son is called Phoenix. In spite of being in a relationship with another woman, she claims that she is in search of healthy love.