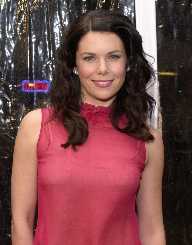 American actress Lauren Graham was born in Honolulu, Hawaii. She is of mixed English, Irish and Scottish ancestry. Her parents divorced when she was five years old, and her father brought her up.

Lauren Graham was a pupil at Langley High School in McLean Virginia, and after graduating, she enrolled at Barnard College where who obtained a BA in English. She then studied for his master’s degree in acting at Southern Methodist University.

One of Graham’s early roles was in the horror film Nightwatch (1997) which starred Nick Nolte, Ewan McGregor and Patricia Arquette which met with mixed reviews. Her next movie Confessions of a Sexist Pig (1998) starred Edward Kerr and Traylor Howard, won a Best Feature Film Award at the New Orleans International Film Festival. In 1999, she appeared in a film based on the life of a country and western singer which a cast including Willie Nelson and Sheryl Crow.

One of her early television roles was in an episode of Law & Order (1990). She appeared in Caroline in the City for five episodes (1995-1996), an episode of Seinfeld as Valerie in The Millennium (1997). She was in fifteen episodes of Conrad Bloom as Molly Davenport (1998). After four episodes of M.Y.O.B. as Opal Marie Brown in 2000, Graham was offered her breakthrough role as Lorelai Gilmore in the Gilmore Girls.

Lauren Graham played Lorelai Gilmore in the Gilmore Girls television series for seven years between 2000 and 2007. There was a reunion series on Netflix in 2016, where she once more starred she starred as Lorelai Gilmore.

Lauren Graham is also a published author. Her first novel was Someday, Someday, Maybe (2013). She has also written a memoir: Talking as Fast as I Can.

Lauren Graham’s partner is Peter Krause, and they have been together since 2010. They have one child.

Lauren Graham was brought up in the Roman Catholic faith.