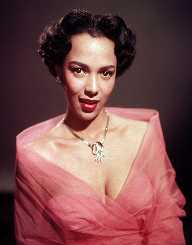 American actress Dorothy Dandridge was born on the 8 November 1922 in Cleveland, Ohio. Her parents were Cyril Dandridge, a minister and cabinet maker and her mother Ruby Butler was an entertainer. She had a sister Vivian. Dorothy Dandridge’s parents separated when her mother was pregnant with her.

Ruby Butler Dandridge encouraged her daughters to become entertainers. Initially, Dorothy and Vivian performed together as the Wonder Children and sang in churches in Ohio. Later, during the years of the Great Depression, the girls moved with their mother to Los Angeles where their mother continued pursuing a career in show business for her daughters. Later, they formed a group with Etta Jones and called themselves the Dandridge Sisters. They found some success, playing at the Cotton Club in Harlem. Dandridge’s first film role was in A Day at the Races (1937) with the Marx Brothers.

After her divorce in 1951 when she reactivated her career as a singer and found success on an international level. In 1952, she co-starred in Bright Road with Harry Belafonte. Dorothy Dandridge starred in Carmen Jones (1954) for which she won an Academy Award nomination for Best Actress. She also starred in Tamango (1955), Island of the Sun (1957), Porgy and Bess (1959) and her final film, The Murder of Men (1961).

Halle Berry portrayed Dandridge in the HBO film, Introducing Dorothy Dandridge (2000) for which she won both an Emmy and a Golden Globe.

Dorothy Dandridge made cinematic history when she became for the first African American woman to be nominated for a Best Actress Academy Award in 1954 for her role Carmen Jones.

In 1942, Dorothy Dandridge married Harold Nicholas. They had one child, a daughter Harolyn who was born in 1943. The couple divorced in 1951. She later married Jack Denison, but the marriage was not successful (m.1959-div,1962). Dorothy Dandridge developed a problem with alcohol and died of barbiturate poisoning on the 8 September 1965.