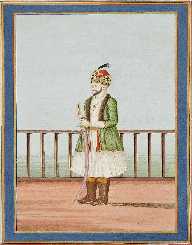 The second Mughal emperor Humayun was born on the 17 March 1508 in Kabul, Afghanistan. He was raised to speak Persian, Turkish and Arabic. He was the son of Barbur (b.1483-d.1530) the first Mughal emperor who traced his bloodline back to Chinggis Khan.

Humayun was a linguist who was also taught mathematics, philosophy, and astrology.

Humayun became the second Mughal ruler in December 1530 with territories consisting of parts of present-day Afghanistan, Pakistan, and areas of Northern India. His half-brother Kamran Mirza inherited control of Kabul and Lahore, and the two became rivals. Humayun ruled his territories until 1540 when he lost them to Sher Shah Suri.

Fifteen years later, Humayun won back his territory with the assistance of the Safavids of Persia. It was around this time that Persian influence, art, and culture took hold of the Mughal Empire. Strengthened by his alliance with the Safavids, Humayun expanded his empire.

When Humayun died in 1556, and his empire covered a vast area, and he was succeeded by his son Akbar.

Historians regard Humayun as an efficient ruler, and during his lifetime he earned the nickname the perfect man. Humayun died after a bad fall in 1556.

His Empress and chief wife were Bega Begum.