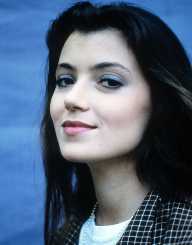 Mia Sara is an actress, her original name is Mia Sarapochiello.

Mia Sarapochiello was born on 19 June 1967, in Brooklyn Heights, New York City. Her parents are Jerome and Diana; she also has younger sister Cassie. Mia attended St. Ann’s School, where she graduated in 1985.

Mia’s first gigs were television commercials, and then she moved onto All My Children in 1982. During high school, she was cast for the role of Princess Lili in Legend; the 1996 film starred Tom Cruise.

Mia Sara s rise to fame was her part as Sloane Peterson, truant girlfriend of Ferris Bueller in Ferris Bueller's Day Off in 1986. Since then, she appeared in a miniseries biopic Queenie, which was loosely based on Merle Oberon.

Mia Sara next hit was A Stranger Among Us in 1992. After a tough year, in 1994 she landed a role in Timecop alongside Jean Claude Van Damme.

Her role as Dr. Harleen Quinzel or Harley Quinn in Birds of Prey, a spinoff from Batman, reminded the world of her presence.

To date, Mia Sara had twenty-one movie roles; last was a short film Pretty Pretty in 2013. She also appeared in twenty- four series, including miniseries The Witches of Oz, and a sequel movie. Mia plays Princess Langwidere in both film and series.

Currently, Mia is semi-retired from the film industry, focusing on poetry. Her poems were published in a few magazines such as Pembroke Magazine, The Write Room, Forge. Mia Sara also accepted the position of column contributor to Barrelhouse. Her chapbook, Mid-Life with Gorilla, was published in 2014, as part of the Dusie Press Kollectiv.

In 1995, Mia Sara won best supporting actress from Saturn Award, for her role in Timecop.

Mia Sara met Jason Connery in a set of Bullet to Beijing television series in 1995, Jason is the son of Sean Connery.

They were married in 1996. Their son Dashiell Quinn Connery was born in 1997. The family lived in Los Angeles, before separating. Mia and Jason divorced in 2002.

Mia Sara dated Brian Henson; they have a daughter, Amelia Jane Henson in 2005. They were married in 2010.