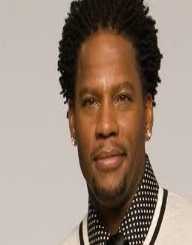 Darryl Lynn "D. L." Hughley was born on March 6th, 1963. He is an American actor and comedian notably known for his character on his sitcom, The Hughleys coupled with being the original host of Comic View show on BET (1992-1993). He hails as a man of many strengths including being a radio host, political commentator and an author.

D.L. Hughley was born on March 6th, 1963. The son to Charles and Audrey and the second born of four siblings. His early teenage life was filled with a myriad of troubles which eventually landed him expulsion from high school. Hughley later reformed, walked away from gang life and as a result got employed with The Los Angeles Times as a telemarketer.

D.L. Hughley kicked off his acting-comedy career by initially writing, producing and hosting Comic View, (1998-2002), a stand-up comedy show on BET. In 2005, he went on to release a stand-up comedy album, Notes From The GED Section coupled with other engagements in the industry on Scrubs and Studio 60 on the Sunset Strip.

In 2012, Crown Archetype published Hughley's first book as an author, merged with contributions from Michael Malice. His second book, Black Man, White House: An Oral History of the Obama Years came in June 2017 and lately published How Not to Get Shot: And Other Advice From White People.

D.L. Hughley worked with CNN as host and writer of a comedic news-show which premiered on October 25th, 2008 and had a global coverage in sports, politics as well as pop culture. He ended the show and his stint at Kiss FM on March 9th, 2009.

His career as a radio personality saw him work in New York City alongside former BET news correspondent Jacque Reid on The D.L Hughley Morning Show (2009-2010).

D.L. Hughley is married to LaDonna, and together they have three children, two daughters Ryan and Tyler and their son, Kyle. His marriage was shaken when his mistress lost their only son.