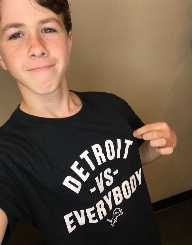 Ethan Wacker is a child actor and a Disney Channel personality. He is best known for his roles as Bernie in Bizaardvark and Pip Whipley in 'Miles from Tomorrow'. With his cute, delightful looks and excellent acting skills, he has won the hearts of many children who take inspiration from him. Currently, he has around 125K followers on Instagram and fans on other social media sites such as Twitter and Facebook where he keeps them posted with his regular updates.

Ethan Wacker started rising to fame at the age of thirteen after he provided his voice to a Disney Channel character, Pimp Whipley in a 2015  television series ‘Miles from tomorrow'. This opened doors to yet another show ‘The Stinky and Dirty Show’ and later for his role as ‘Bernie’ in Bizaardvark. In his acting, he portrays a hilarious character with excellent vocal skills he has learned from his experience in the show and his senior cast members such as Venere Jake Paul.

He recently started a YouTube group called ‘Squad 7’ alongside Michael Campion, Cody Veith, Casey Simpson and Isaak Presley. In his YouTube channel, he keeps his fans entertained with his video uploads of him, his Disney co-stars and his life or recent developments in the show.

Ethan Wacker was born on May 8, 2002, in Hawaii. He has three siblings, an older brother, Christian and two sisters, Olivia and Natalie. Additionally,  Ethan schools and lives in Hawaii. He loves his homeland for its beautiful terrains and regularly flies to Los Angeles for shooting. He respects his father as his role model and enjoys uploading videos of himself with his family on YouTube.

Apart from his acting, Ethan Wacker enjoys skiing and playing sports. He also finds pleasure in taking and uploading videos of himself and his family. Although he has many female followers on social media for his cute looks, he is currently single and happy being just a friend to them.

Ethan Wacker has a good relationship with his co-stars and hangs out with them as featured in his video uploads. Additionally, he enjoys interacting, and in one instance, he was astonished by the performance of Heath Ledger in ‘The Dark Knight.’ He also enjoys trying various cuisines, his favourite food being ‘French Fries’ and loves Lemon. He would like to travel and explore the Arctic and Great Barrier Reef.

As an excellent actor and voice artist of the Disney entertainment, many children think that Ethan has achieved his dreams of being a star. By no means does he share this feeling, instead, he hopes to attain all his goals and continues to work hard.

He openly accepts criticism and desires to learn and improve his skills in acting. He finds time to spend with his senior co-stars which have helped him acquire a lot of knowledge improve his acting. He is thankful for the support of his fans and feels blessed to have received success at such an early age. There is no doubt that he is an upcoming movie star!

Ethan Wacker made a brief appearance in the sitcom ‘KC Undercover’ long before his fame as a television actor. In Kindergarten he was nicknamed weedwacker.