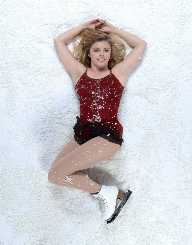 Ashley Wagner is the daughter of a military officer in the employment of the U.S. Army. She was born in Germany at the Heidelberg Army base in the year 1991, May 16th. Her early years were very eventful as she lived in two countries within the period and across six American states. Her younger brother named Austin is involved in sporting activities as a skater. Ashley was her parent’s first child.

When Ashley turned five, she started learning how to skate in the state of Alaska at Eagle River. Ashley turned to figure skating in those early kindergarten years and exemplified a rare talent that caught the eye of instructors and colleagues. In the aftermath of the settling of her family in the state of Virginia, Wagner blossomed tremendously in her skating skills.

Ashley Wagner already set her sights on the Olympics by the time she turned seven years old. She spelled this out when she was interviewed on the skating channel, Ice Network. Ashley took a liking for the 1998 gold medalist in the sport at the Winter Olympics. She set this as her objective. In the year 2002, Ashley Wagner fired her determination by training with Shirley Hughes, who took to coaching her. She ran the course of her up-skilling sessions at the Mount Vernon Ice Arena. Ashley moved after that to Delaware in the Wilmington area, where she started off under Johnny Weir’s tutor, Priscilla Hill.

When the trials for the Olympics holding in the year 2010 were held, Ashley missed the threshold with about 4 points. She moved to college after that and thought of ditching the sport. However, she regained her mojo and upped the ante in her training. Ashley returned home and boosted her training although she had to cope with bouts of muscle spasms in the process. The fit of struggles was run its full course all through the season to the year-end of 2011. Ashley Wagner was yet undaunted and did not lie low because of the pains as she tottered on to California south to meet John Nicks. The skating legend took her in along with Philip Mills, who choreographed her.

They settled for the Ice Palace at the Aliso Viejo. Nicks is reputed for handling Sasha Cohen and Peggy Fleming, both medalists in the Olympic event of ice skating.

Ashley showed that her perseverance and determination was paying off when she won the 2012 Four Continents ladies event. She also did same with the U.S. championships on a consecutive basis. Nicks was her guiding light all the way.

Ashley, however, had to compete without Nicks in the fall of 2012 as the trainer was now 84 years old and travel-weary. The living legend had worked with her for two years, at this time.

Ashley Wagner ran through 2014 on a rollercoaster. She ramped up several highs but also recorded some lows on the way. She failed in the Olympic qualifiers and lost her U.S title.

Ashley was however given a waiver to book a place in the U.S team by her last season’s performance, which came above par. Not a few were confounded by the decision as Mirai Nagasu showed better form during the national trials.

Ashley Wagner clinched her first global trophy in April 2006 by picking the Triglav Trophy. She was on point again that autumn when she came top of the pole position during Grand Prix Championships held at the junior level by the International Skating Union. At the finals of the Junior Grand Prix, she was second-placed. At the senior level, Ashley Wagner picked bronze in 2007 at the Trophée Eric Bombard. She reprised this performance at the 2008 U.S. Championships, which held in January of the same year.

As she got fired up for more highs, Ashley was at the Skating Club of Wilmington to train under the watchful eyes of Priscilla Hill, that year. Her drive paid off with a secondly placed medal at the Rostelecom Cup, which held in 2009. She set a score that turned out to be her career high. At the national trials for 2010, Ashley was third-placed, and this was enough to see her off to the Winter Olympics. This was just good enough for the free skate routine and gave her an opening as a sub for the figure skating duo pick.

Moving forward to the 2015 season, Ashley Wagner began the prep for the year by enriching her routines with unusual skating combinations. She did this as the U.S. Championships for the year was close by. She succeeded in erasing the national record and replaced it with a new one, which gave her a set of three titles in four competitive years,
Ashley got a bronze medal in the Russia-hosted Sochi Winter Olympics team skating event. She ended however at the 7th position in the individual event.

After the end of the season, she returned to training this time with Adam Rippon, who clichéd his initial national title in2016 January. Their routines start off with rope jumping.

Ashley Wagner already turned 24 at the time she bagged the 2016 figure skating world championships silver medal. This was a new opening after a long season of no medal. At the 2017 U.S trials, Ashley was again second-placed after losing the top spot to the championship favorite, Karen Chen. She has fought back aging like a real Pro like she is and she is not waiting to be told how old she is.

In a media chat, Wagner retorted that other athletes make a comeback in boxing, baseball, and the range but they never get asked how old they are! She intends to continue competing until she is no longer able to do so.

No word exists yet on the love life of this hard-fighting athlete.