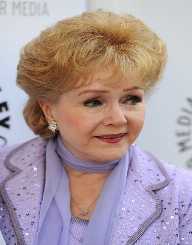 Debbie Reynolds is an American actress who is best known for her roles in Singin’ in the Rain and The Unsinkable Molly Brown.

Debbie Reynolds was born in El Paso, Texas on 1 April 1932 as Mary Frances Reynolds. Her parents were Raymond Reynolds and Maxene née Harman. Her father worked for the Southern Pacific Railroad as a carpenter. Due to the low income of the family, her mother supplemented the family finances by washing laundry. When Reynolds was seven years of age, her family moved to Burbank in California. Reynolds attended Burbank High School.

In 1948, at the age of sixteen Reynolds entered and won the ‘Miss Burbank’ beauty contest. This led to Reynolds gaining a contract from the Warner Bros film production studios. MGM had also wished to sign young Reynolds, but executives tossed a coin and the winner, Warner Bros, got to sign the teenager.

Her first film appearance was uncredited as Debbie Reynolds took a minor role in June Bride, a comedy which starred Bette Davis and Robert Montgomery. Reynolds first credited role came in the 1950 musical, The Daughter of Rosie O’Grady. The same year Reynolds worked with MGM Studios, who had previously had tried to sign Reynolds, on two musicals, Three Little Words and Two Weeks with Love. The soundtrack of Two Weeks with Love, on which Reynolds featured, became the first soundtrack to gain a gold certification. 1951 also brought a role in an MGM Studios musical, Mr. Imperium.

In 1952, received billing in the hugely successful musical, Singin' in the Rain. The film was a modest success at the time of its release, performing well with critics and audiences. However, it is today considered one of the masterpieces of the musical genre. Reynolds was still only eighteen at the time of filming and later claimed that Gene Kelly, her co-star, was a brilliant influence on her dancing and performances. After Singin’ in the Rain, Reynolds began to star in some musicals and comedies. In 1955, she starred alongside Frank Sinatra in The Tender Trap. She appeared alongside Leslie Nielson while taking the lead role in Tammy and the Bachelor.

Debbie Reynolds continued to be a dominant force in comedy and musicals during the rest of the 1950s and into the 1960s. In 1962, she was part of the all-star cast for the western epic, How the West Was Won. The film also featured Gregory Peck, James Stewart and John Wayne. The film was a big hit commercially and critically. Reynolds received substantial personal praise for her performance in The Unsinkable Molly Brown. The film was a musical covering the life of the wealthy eccentric Molly Brown who survived the Titanic maritime disaster. In 1966, Reynolds played the title role in The Singing Nun, a decision she greatly regretted.

Reynolds was given a weekly show on the NBC network and was made the highest paid female on television. The show captured a massive quantity of audience share. Reynolds left the show after a year as NBC advertised cigarettes during the breaks in the show and Reynolds fundamentally objected of the advertisement of cigarettes during a show watched by children. In 1973, she lent her voice to the animated musical, Charlotte’s Web.

Debbie Reynolds continued to make television and film appearances during the 1990s. She made guest appearances on the shows, The Golden Girls, and Wings. She also has a cameo appearance in the 1992 hit film, The Bodyguard. In 1996, Reynolds made her first significant film appearance in over twenty years when she starred in the Albert Brooks directed, Mother. Reynolds played the matriarch of the Cromwell family in the Disney Halloween classic, Halloweentown. She returned to the role in the films 2001 sequel and the subsequent Halloweentown films in the series.

Reynolds also made some appearances in the American television comedy, Will & Grace, playing the mother of the titular Grace. She provided the voice of Lulu Pickles in the animated Rugrats in Paris: The Movie. She continued to make appearances as herself on shows featuring in an episode of RuPaul’s Drag Race in 2010. Reynolds last major film appearance was in the 2013 film, Behind the Candelabra. During her long film hiatus during the late 1970s and early 1980s, Reynolds performed on stage. Even before her film break Reynolds had done some three-month stage show stints in Las Vegas.

Debbie Reynolds also released some music records featuring songs from her many musical appearances. Reynolds, despite her love of musicals, did not make her Broadway debut until 1973. This was in part due to family commitments and not wanting to relocate to the East Coast. The 1973 production of Irene, broke first-week box office records on Broadway. Reynolds also appeared in stage productions of her films.

Debbie Reynolds married fellow actor Eddie Fisher in 1955. Together they had two children, Carrie and Todd. Both Carrie Fisher and Todd Fisher would follow in their parents’ footsteps into show business. Carrie would appear alongside her mother in the Broadway production of Irene. Carrie would achieve worldwide fame herself when she played Princess Leia in the Star Wars franchise. Eddie Fisher had an affair with Elizabeth Taylor and this led to a divorce between him and Reynolds.

Reynolds remarried in 1960, marrying Harry Karl. Karl’s gambling problem caused strain on their relationship and Reynolds’ finances; they divorced in 1973. In 1984, Reynolds married Richard Hamlett. They divorced in 1996. Reynolds was a keen collector of film memorabilia and displayed them in a Las Vegas museum. The exhibit was then moved to a Tennessee museum but went bankrupt, and the collection was auctioned. Reynolds’ part of the collection was valued at over ten million dollars.

On 27 December 2016 Reynolds’ daughter Carrie Fisher died. The death hit Reynolds hard, and the next day she was hospitalized. Reynolds died on 28 December 2016 in Los Angeles.

Debbie Reynolds has been nominated for five Golden Globe Awards during her career but did not win any. She was nominated for the Best Actress Award at the 1965 Academy Awards for her role in the musical, The Unsinkable Molly Brown. In 1973, Reynolds received a nomination for Best Actress in a Musical at the Tony Awards. Reynolds was awarded an Academy Award in 2015 for her humanitarian work.

Debbie Reynolds worked with The Thalians, a charitable organization founded by Hollywood actors to help children and adults with mental illnesses. Reynolds had served as president of the organization.

Reynolds was raised in the evangelical Christian faith and was part of the Church of the Nazarene.