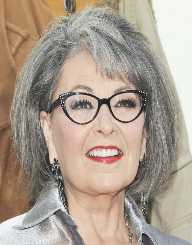 Roseanne Barr dominated the 20-century television industry. She is famously known for filling the gap of American stand-up comedy, theater, film, and television. Not to mention she makes a perfect director, writer, and producer. Being grouped in the Scorpion category, Barr is no other than an intelligent, witty and humorous being. Her comics revolve around a yin and yang relationship that can allow me to call her a ‘domestic goddess.' Wait, Barr also loves herself to the moon and back. Keep still as I monger you into her early and later life.

On November 3, 1952, Roseanne Bar was born in Salt Lake City in Utah, the United States to Jerome Barr and Helen. Her mother worked as a bookkeeper while her father was a prominent salesman. Roseanne experienced a hard childhood when she was hit by a car at her tender age that she came to suffer a brain injury. At the age of three, Barr suffered from Bell's Palsy. At 18 years old, she runs away from her parents’ home where she embarked on her stand-up comedy career in local clubs.

Roseanne continued to perform at local clubs in Colorado and Denver. She also appeared in the main shows including The Tonight Show, Comedy Store and Late Night with David Letterman. Afterward, she launched her show titled The Roseanne Barr Show. From 1988 to 1997 she became a one of a kind figure both in television and reality. Her character roles earned her not one but many awards such as Kid’s Choice Award and Golden Globe Award.

In 1989 Roseanne released her autobiography in 1989 called Roseanne My Life as a Woman. She was also seen in ‘She-Devil’ movie the same year. In the 1990s she joined several entertainment hustles such as Saturday Night Live. She followed it up with another autograph titled My Life. In 1998 Roseanne trailed her acting in several theaters where she played the Wicked Witch of the West. The same year she created her talk show called The Roseanne Show. After two years her show got canceled where she went to project on her television roles.

From 2006 to 2012 Roseanne came to love her television career. After a short pause, she hosted ‘The Search for the Funniest Mom in America.' She followed it up by co-hosting on KPFK political show. In 2012 Barr vied for a presidential candidate seat under Federal Election Commission. Although she lost the count, she tried on Peace and Freedom Party ticket where she won for the first time.

Roseanne Barr married Bill Pentland in 1974, and the couple was blessed with three children; Jake, Jessica, and Jennifer. After 16 years in the union, the couple divorced in 1990. The same year she married Tom Arnold till 1994. In 1995 Barr married her private security guard Ben Thomas. The couple opted to go through in-vitro fertilization where they had a son called Buck. They stayed together till 2002.

In 2003 Roseanne dated Johnny Argent where they currently live in Hawaii. One major reason as to why Barr loves herself is because she has undergone a tummy tuck, breast reduction, and gastric bypass. Beauty lies in her eyes and not on the beholder. She has a gay brother, Ben Barr and lesbian sister Geraldine Barr. At 17 years old Barr got pregnant and opted to place the baby for adoption. After ten to twelve years she reunited with her son.