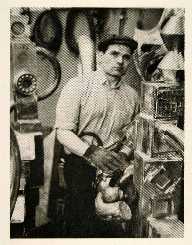 Sir Eduardo Luigi Paolozzi was a Scottish sculptor and artist. Born on March 7, 1924, he was one of the leading figures of the British Pop art using mass-media images. Paolozzi moved to Paris in 1947, where he became engrossed with Dada and Surrealism. Back to London, he joined the Independent Group, which comprised of artists who opposed modernism in the art world.

As a sculptor, Paolozzi did many monumental works including the sculpture of Sir Isaac Newtown at the British LibraryLuigi Paolozzi became a knight in 1989.

Eduardo Luigi Paolozzi was born on March 7, 1924, in Leith, Edinburgh in Scotland. He was the only child of parents with Italian descent. At the age of 16 in 1940, he was detained with other Italian men for three months at the Saughton prison after Italy declared war on the United Kingdom.

His father, uncle, and grandfather were part of the 446 Italians who drowned aboard theArandora Star, to Canada, which was sunk by a German U-boat. In 1943, Paolozzi studied at the Edinburgh College of Art and later at Saint Martin’s School of Art in 1944. He enrolled at the Slade School of Fine Art at the University College London in 1944 and graduated in 1947.

Luigi Paolozzi moved to Paris after graduating from school. His stay in Paris would influence his later life as he became acquainted with Jean Arp, Alberto Giacometti, Fernand Leger, and Constantin Brancusi among others. He became a proponent of Surrealism during his stay in Paris and made sculptures and collages by such a culture. His collages included clippings cut from magazines.

Paolozzi returned to London in 1949, to establish a studio in Chelsea. He used several materials and object for his works, especially for collages. His screen prints and Art Brutt sculptures made him popular at the time.

In 1952, he founded the Independent Group, made up of a group of artists who were not content with modernism and forerunners of the mid-1950s British and late 1950s American Pop Art movements. One of his collages, “I was a Rich Man’s Plaything” in 1947 is regarded as one of the foremost representation of Pop Art.

In 1955, he established Hammer Print Limited in Thorpe-le-Soken in Essex alongside Nigel Henderson. The company produced wallpapers and textile designs. He worked with a wide range of media throughout his career, becoming more associated with sculpture making. He is known for making lifelike monumental works.

Luigi Paolozzi taught in several schools as a sculpture and ceramics instructor. He started his teaching career with London’s Central School of Arts and Design from 1949 to 1955. From 1960 to 1962, he taught at HochschulefürbildendeKünste Hamburg and the University of California, Berkeley in 1968.

Luigi Paolozzi also instructed at the Royal College of Art. Paolozzi also had some teaching collaborations with Germany, as he worked with the Berlin Artist Programme of the German Academic Exchange Programme from 1974. From 1977 to 1981, Luigi Paolozzi served as a professor at the Fachhochschule in Cologne and the Akademie der BildendenKünste in Munich.

During the 1960’s Luigi Paolozzi did series of refined graphics works which he explored and expanded the possibilities and limits of the silkscreen medium. His works include As Is When, Moonstrips Empire News, Universal Electronic Vacuum, and General Dynamic Fun.

His most notable works include the patterned mosaic walls of the Tottenham Court Road tube station, the cover of Paul McCartney's album Red Rose Speedway, ceiling panels and window tapestry at Cleish Castle and the Piscator sculpture outside Euston Station, London. Others include

Relief aluminum doors for the University of Glasgow's Hunterian Gallery the bronze sculpture Newton after Blake, 1995, in the piazza of the British Library and the Head of Invention sculpture on the South Bank in front of the Design Museum.

In 1968, Luigi Paolozzi was made a commander of Most Excellent Order of the British Empire (CBE). He 1979, he was elected to the Royal Academy and in 1986 moved to the office of Her Majesty’s Sculptor in Ordinary for Scotland, a position he held until his death. In 1989, Queen Elizabeth II knighted him as Knight Bachelor.

Eduardo Paolozzi married Freda Elliot with whom he had three daughters, Louise, Anna, and Emma. The couple divorced later. He suffered a near-fatal stroke in 2001 and was speculated that he had died. The stroke retired him to a wheelchair. Battling with a long period of illness, he died on April 22, 2005, in London, England.