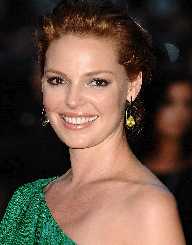 American actress Katherine Marie Heigl was born on November 24, 1978, in Washington D.C. She is the youngest of for children to her parents Nancy and Paul Heigl. Her mother was a personal manager, but her father-a financial executive and accountant. The family lived in Virginia, Denver and finally moved to New Canaan, Connecticut when she was five years old.

Heigl and her family suffered from a great loss in 1986. Her brother Jason was in a car accident and died of injuries. The tragedy led the family to convert to The Church of Jesus Christ of Latter-day Saints.

Heigl’s career was in a way started by her aunt. When Heigl was nine years old, her aunt took several photos of Heigl and sent them to several modeling agencies after acquiring approval from her parents. Heigl was signed to Wilhelmina Models. She made her magazine debut soon after- Heigl posed as a child model for Sears and Lord & Taylor. Her TV commercial debut was for Cheerios cereal.

In 1992, Heigl made her film debut in the movie That Night. Her next project was Steven Soderbergh's King of the Hill. Heigl’s first leading role was in the 1994 comedy My Father the Hero. During this time, Heigl was also working on her academic studies, but she dropped out of high school after her sophomore year. In 1995, Heigl starred in Steven Seagal’s thriller Under Siege 2: Dark Territory. Besides her film work, she also continued to model intensively.

In 1999, Heigl decided to turn her attention towards television. She accepted the role of Isabel Evans on the TV drama Roswell. Her role was expanded into show’s second and third seasons. During this time, she also starred in several films, like 2001 film 100 Girls and the horror film Valentine.

Her next TV project was the thriller Ground Zero, which was based on the James Mills novel The Seventh Power. She starred as a college student that helps to build a nuclear device to express her views on the need to change national political priorities. However, after the 9/11 terrorist attacks, the film was not released. She also appeared in horror movie Evil Never Dies, and romantic drama Love Comes Softly. She also starred in the comedy The Ringer and TV film Romy and Michele: In the Beginning.

In 2005, Heigl started work on what would later turn out to be her most high-profile role. She was cast as Dr. Isobel Stevens on ABC’s medical drama Grey’s Anatomy. The show was originally introduced as a mid-season replacement but became one of the highest-rated shows on TV. In 2006, Heigl was nominated for the Golden Globe Awards for Best Supporting Actress in Series, Miniseries or Television Film for her work on the show. In 2007, Heigl won the Primetime Emmy Award for Outstanding Supporting Actress in a Drama Series for her role in Grey’s Anatomy.

During her time on Grey’s Anatomy, Heigl also starred on the successful comedy Knocked Up and 27 Dresses. For her role in the latter, Heigl was paid $6 million. She also starred with Gerald Butler in The Ugly Truth on 2009 and drama Live As We Know It.

In 2008, there were speculations that Heigl is going to leave Grey’s Anatomy after the end of 2009 season. She refused to put her name in for consideration of the Emmy award. Heigl believed that the material given to her did not warrant an Emmy award. The showrunner Shonda Rhimes stated that she is not insulted by Heigl’s decision and that her character had less to do in the season since Heigl asked for a lighter work schedule. Still, she returned for the sixth season of the show. In 2010, Heigl was not showing up for work, and Rhimes released her from her contract. Heigl stated that she wants to focus more on her family.

After leaving Grey’s Anatomy, Heigl starred in several romantic comedies. She starred in 2011 comedy New Year’s Eve, which was a box office success, but received negative reviews from the critics. Her next project One for the Money was a box office failure and earned Heigl a Golden Raspberry Award for Worst Actress.

She also appeared in the 2013 movie The Big Wedding and TV commercial for Vick’s ZzzQuil. In 2017, she started to work as the lead actress in the CBS drama Doubt.

In 2006, Heigl got engaged to singer Josh Kelly. The couple married in 2007, and two years later they adopted a daughter from South Korea. In 2012, they adopted their second daughter from the US. In 2016, Heigl announced that she is expecting a child, and she gave birth to a baby boy Joshua Bishop Kelley Jr.

Heigl is also active in her work with various charities. She has worked with the Best Friends Animal Society. She worked on a program that transports small dogs from high-kill animal shelters. She and her mother also started the Heigl’s Hounds of Hope Foundation, which rescues larger dogs with behavior problems from shelters and rehabilitates them through training. Heigl owns eight dogs herself. In 2010, she was awarded the Presidential Service Award by ASPCA for her work on animal welfare.

Besides her work with animals, Heigl is also a strong supporter of organ donation. She is the spokesperson for Donate Life America.