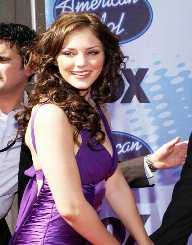 Katharine Hope McPhee was born in Los Angeles, California on March 25, 1984. Her father is a TV producer, but her mother has been a vocal coach on American Idol since 2011. Her mother recognized her vocal abilities when she was 12 years old and decided to train her. She also has a sister Adrianna.

McPhee went to the Notre Dame High School in Sherman Oaks. During her school years, she performed in various school plays and musicals. After graduation, she attended Boston Conservatory for three semesters and majored in Musical Theatre.

Katharine McPhee was advised by her manager to leave school and try out for some TV pilots. In 2005 she starred as Annie Oakley in an LA-based production of musical Annie Get Your Gun. For the role, she was nominated for LA Stage Ovation Award.

In 2005, McPhee tried out for TV competition American Idol. She auditioned with the song “God Bless the Child” and was selected for the 5th season. She finished as a runner-up to Taylor Hicks.

After the show, Sony BMG announced that McPhee is signed to Simon Fuller’s 19 Records Limited and Sony BMG’s RCA Records. Her single “Somewhere Over the Rainbow/My Destiny” was released in 2006. She missed the first three weeks of American Idol tour due to laryngitis and bronchitis. She has also performed together with Andrea Bocelli.

In 2007 Katharine McPhee’s solo album titled Katherine McPhee was released. The record was successful and sold over 110, 000 copies in its first week. Later that year she starred in web-series lonelygirl115. Also, she made the appearance of herself in Ugly Betty. In 2008 it was reported, that McPhee has been released from her contract with RCA records and was going to record her next album on her own. She signed a two-year endorsement deal with Neutrogena and became the spokesperson for their anti-acne skin-care line.

Her studio acting debut was in the movie The House Bunny, which was released in 2008. McPhee also guest starred CSI: NY series. In 2009 she signed a record deal with Verve Forecast records and the following year released the album Unbroken, which reached the Billboard 200 chart at No.27.

On February 2011, it was announced that Katharine McPhee had landed a role in TV series pilot Smash. The same year, she also signed a record deal with Colombia Records to distribute the music for Smash. In 2013, she began recording her 4th studio album, featuring collaborations with Sia Furler, Linda Perry, and Ryan Tedder. In 2014, she was announced to star as the female lead in CBS series Scorpion. The show is currently in its 3rd season.

In 2008, Katharine McPhee married her long-time boyfriend, Nick Cokas. He was the one who encouraged her to join the American Idol. In 2014 she announced that they are separated, and in 2016, the divorce was finalized. McPhee has openly talked about her past eating disorder and her issues with having a healthy body image.