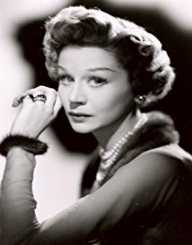 English actress Margaret Leighton was born on February 26, 1922, in Barnt Green, near Birmingham, Worcestershire, United Kingdom. Her father was a British businessman. She had a strong desire to become an actress since her childhood days even before she could fathom the true implications of becoming an actress. However, she was fully confident of earning her livelihood by pursuing acting as a full-time profession. At the age of 15, she auditioned for Sir Barry Jackson at the Birmingham Repertory Theater. She left the school and abandoned her studies for the purpose. Jackson saw her potential and employed her as a stage manager. He also helped her by giving her a small role in the stage play ‘Laugh with Me’ (1938). Thereby, the play marked her professional debut on stage as ‘Dorothy’.


AS A STAGE ACTOR

Margaret left Birmingham Repertory Theater in January 1941. Thereafter, she joined the Basil C. Langton's Traveling Repertory Company for a brief period. She returned to Birmingham Repertory in 1942. Upon her return, she engrossed herself fully in preparation for the plays written by the likes of Chekov, Shakespeare, and Shaw. The rehearsals of the plays were conducted during the day time while it was performed on stage at nights. According to her own admission, she was so involved with the entire proceedings for two years that her days were restricted only between the theater and the two streets she had to pass through to reach there.

She received critical applause for her skillful and distinctive acting during the late 1940s and also in the 1950s after her several appearances on both Broadway and London stages. Her entry to the Old Vic Company at the New Theatre was the reason behind her success. In August 1944, she made her London debut for and on behalf of the Old Vic Company. She played the role of the daughter of the troll king in ‘Peer Gynt’ in her maiden appearance for the company. She made her Broadway debut at New York City stage in 1946. The Americans immensely praised her role of Lady Percy in the play Henry IV, Part I (1946). The stalwarts of the Old Vic Company Ralph Richardson and Laurence Olivier made their presence felt through their direction and appearance in the lead roles of the play.

Margaret enthralled both the Broadway and London audiences with her several stage appearances over a long period of time. Among her most impressive performances on London, stages include the likes of ‘The Cocktail Party’ (1950), where she portrayed the role of Celia Coplestone. She appeared as Orinthia in a revival of ‘The Applecart’ in 1953. Her performance in ‘Separate Tables’ (1956) and in ‘The Night of the Iguana’ (1962) earned her two Tony Awards for Best Actress in a play. Both the plays were staged at Broadway. She earned nominations for a Tony Award four times during her stage career. She won the award twice out of these four nominations.

Though primarily a theatre actress, she made her name count in more than 20 film appearances. The six best films of her career are 'The Winslow Boy' (1948), 'The Astonished Heart' (1949), 'Bonnie Prince Charlie' (1948), 'The Sound and the Fury' (1959), 'The Go-Between' (1971) and 'The Madwoman of Chaillot' (1969). She won the BAFTA Award for Best Actress in a Supporting Role and earned a nomination for an Academy Award for Best Supporting Actress for her role in the film ‘The Go-between’. She also earned the nomination for a BAFTA Award for Best British Actress for her performance in the film Carrington V. C.

CAREER AS A TELEVISION ACTRESS

Margaret married her first husband Max Reinhardt in 1947. He was best known for his unique collection of photographs and letters from celebrated playwright and novelist George Bernard Shaw. They divorced in 1955.

In 1957, she married actor Laurence Harvey. They also eventually divorced in 1961. In 1964, she tied the nuptial knot with her co-star of 'Lady Caroline Lamb' (1972) Michael Wilding. Her third and final marriage turned out to be a long lasting affair broken only due to her eventual death in 1976.

She breathed her last on January 13, 1976, after suffering from the complications of multiple sclerosis. Margaret had no children.