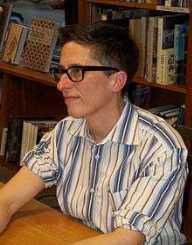 Alison Bechdel is an American illustrator and graphic novel author.

Alison Bechdel was born in the city of Lock Haven, Pennsylvania, on September 10, 1960. Her mother, Helen, was a teacher and former actress. Her father, Bruce, was a teacher and an owner of a funeral home. She has two brothers – Bruce and John. She attended Simon’s Rock College. She then transferred to Oberlin College in Ohio. She got her bachelor’s degree in art in 1981.

After graduation, Bechdel moved to New York City. She worked in the publishing industry. In 1983, she started her comic strip called Dykes to Watch Out For. It revolved around a group of lesbian characters. It was published by many alternative newspapers, such as WomaNews. It also expanded into a line of posters and postcards. She created the comic until 2008, and she published a few collections. Apart from that, she also worked on illustrations for different magazines, such as The Advocate.

Alison Bechdel published her first graphic novel, Fun Home: A Family Tragicomic, in 2006. She talked about her childhood and her relationship with her father. She mentioned topics such as gender identity and depression. The book reached the Bestseller List of The New York Times and stayed there for several weeks. It was praised by many magazines and newspapers. It was then adapted into a play. It first played on the Off-Broadway stage in 2013. Two years later, it reached Broadway. Bechdel’s second graphic novel was called Are You My Mother. It talked about her current relationship and her old memories with her mother.

In 2012, Bechdel became a Fellow for Arts and Practice at the University of Chicago. She taught a class there on comics. She is known for creating the Bechdel test – a measure of gender equality in fiction. It tests whether a film or a book has at least two women talking to each other about a topic other than a man.

Alison Bechdel won several awards for her contributions to the LGBT community. They include the Stonewall Book Award, the Bill Whitehead Award, and the Lambda Board of Trustees Award. In 2014, she won the MacArthur Genius Grant. The next year, she got a Prize for Excellence in Mental Health Media from the Erikson Institute.

She also received a Distinguished Educator Award from the International Forum for Psychoanalytic Education. Her first book won the Eisner Award. It was also nominated for a National Book Critics Circle Award and a Best Graphic Album Award. The stage adaptation of her book won several Tony Awards.

Alison Bechdel came out as a lesbian in her teens. That became a vital part of her work. In 1992, she started dating Amy Rubin. In 2004, they got married in a civil ceremony in San Francisco. However, the California Supreme Court ultimately rejected all the marriage licenses for same-sex couples made at that time. She and Amy split up in 2006. After that, she started dating Holly Rae Taylor. They got married in 2015.