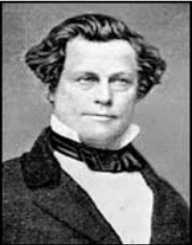 Elijah Lovejoy is an American Presbyterian minister who also worked as a newspaper editor and abolitionist. Due to his support for the abolitionist regime, he was shot dead in a shootout held in one of Gilman & Godfrey’s warehouse, which also served as his printing press at the time. Lovejoy’s death was considered as the “First Casualty of the Civil War.”

Elijah Lovejoy was married to Celia Ann French, a native of St. Charles. They wed in 1835, and their union brought forth two children.


The Origins of a Devout Man’s Son

Born on November 9, 1802, as Elijah Parish Lovejoy in Albion, Maine, he was the eldest of nine children to parents Elizabeth and Daniel Lovejoy. He was named after his father’s close friend who was also a minister and politician. His mother was a homemaker while his father worked as a farmer and Congregational preacher, but both of them were devout Christians. With his limited education, the older Lovejoy urged his children to study, hence Elijah’s early exposure to theological writings and the Holy Scriptures.

He accomplished his early education in the Academy at Monmouth and China Academy. In 1823, he relocated to Waterville, Maine to attend Waterville College after becoming proficient in mathematics and Latin. Naturally gifted with his studies, he was urged and recommended by the faculty to continue his studies at Waterville College where he graduated at the top of his class in September 1826. Before graduating, he worked as a teacher for the college preparatory division and continued to teach upon graduating.

However, Elijah Lovejoy's interest in teaching and waned; therefore, he was advised by the faculty that he should instead serve God. Initially, he planned to settle in Illinois but made a few stops along the way. He worked for a while in New York as the Saturday Evening Gazette’s subscription peddler to earn money. He didn’t earn enough, which prompted him to write to Waterville College’s President, Jeremiah Chaplin, asking for financial assistance which the president much obliged. He eventually made it to Illinois but did not quite settle to the area; hence, he once again relocated, and this time, he chose St. Louis as his place of settlement.

At St. Louis, Elijah Lovejoy started writing poems which he submitted to the local newspapers, of which some of them got accepted and published. Soon enough, he found himself working as an editor alongside TJ Miller at the St. Louis Times. Working at the Times led to the introduction of like-minded individuals such as Archibald Gamble, Edward Bates, and Hamilton R.

In 1832, he heeded God’s call and joined the First Presbyterian Church by becoming a preacher. He was heavily inspired by David Nelson who at the time was not only an abolitionist but also a leader of a Christian revivalist movement.

The Abolitionists’ Advocacy and the St. Louis Observer’s Establishment

Elijah Lovejoy attended Princeton Theological Seminary after selling his interest at the St. Louis Times and became an ordained Presbyterian minister on April 1833.

Shortly after his ordination, he was offered a post as an editor of a new Presbyterian newspaper. Accepting, this local newspaper came to be as the St. Louis Observer, which made its first publication on November 22, 1833.

While working at the Observer, Elijah Lovejoy heavily criticized the Catholic Church and wrote about the slavery that was rampant at the time. These writings didn’t go unnoticed, and soon enough, Lovejoy has made more enemies at St. Louis. Attracting a lot of negative attention prompted him to step down from his position as an editor and eventually, he relocated in Alton, Illinois along with his family.

Elijah Lovejoy's fast-held belief regarding abolition came to be his cause of death. At the age of 34, he was shot five times which led to his immediate death at a shootout that occurred on November 7, 1837, at Gilman & Godfrey’s where he hid his printing press. He was hailed as a martyr by fellow abolitionists and prompted his brother Owen Lovejoy to become not only a leader of the abolitionist but also entered the world of politics.