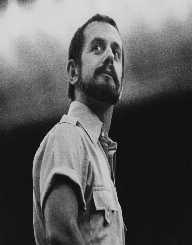 Abdullah Jaffa Bey Khan was an American dancer, choreographer, and teacher. Born on December 24, 1930, Robert Joffrey is best known for his highly imaginative modern ballets. Robert Joffrey is the co-founder of the Joffrey Ballet along with his partner, Gerald Arpino. The company since became one of the renowned professional dance company, and choreographers and dancers like George Balanchine, Paul Taylar, and Twyla Tharp worked there. Robert Joffrey also adopted works of other prominent choreographers.

Robert Joffrey was born on December 24, 1930, in Seattle, Washington in the United States of America. He was born to a Pashtun father from Afghanistan and an Italian mother. Born with asthma, Robert Joffrey started practicing dance at age nine as part of his treatment process. Being enthuse with the dancers like Fred Astaire and Gene Kelly, Robert Joffrey started his dance training under Mary Anne Wells. She was very influential in the training and later career of Joffrey. With his interest in ballet, he continued his dance education studying ballet and modern dance at the School of American Ballet in New York City in 1948. Robert Joffrey also received training under Alexandra Fedorova, a famous Russian dancer-choreographer. Even before this time, Robert Joffrey at age 11 had made up a whole cast of Sleeping Beauty.

Robert Joffrey made a professional dancing debut with French choreographer Roland Peti and his Ballet de l’Opera National Paris in 1949. A year later, Robert Joffrey taught at the New York High School for the Performing Art, where he worked until 1955. This was where he also staged some of his earliest ballets. With his growing passion for dance and edge to teach others, Robert Joffrey founded the Joffrey Ballet School in 1953 in New York City. Robert Joffrey operated it as a separate company from The Joffrey Academy of Dance in Chicago, the official school for the Joffrey Ballet Company. With his studies in modern dance and ballet, Joffrey became to infuse the two, which has become very common currently.

Robert Joffrey impeccably worked on his choreography, that he was able to blend the exact footwork, precision, and grace of classical ballet with the floor work, upper body dexterity, and raw emotion of modern dance and this made him one of the best dancers and choreographers of his time. In 1954, Robert Joffrey premiered  Lebalmasque(The Masked Ball) with music by Francis Poulenc. Robert Joffrey followed it with Pierrot Lunaire in 1955 with music by the Austrian composer, Arnold Schoenberg. The Gamelon, 1962 and Astarte, 1967 followed, and with these, Robert Joffrey set it to rock music and with special lighting and motion-picture effects. Joffrey and six other dancers from the Robert Joffrey Studio Dancers in 1956 toured around the United States performing twenty-three shows in eleven states. The crew later performed in India, the Middle East, the Soviet Union, and at the White House.

His works also included that of Alvin Ailey, Twyla Tharp, George Balanchine and other commissioned from new choreographers. His company became the first American dance company to perform the work of Danish choreographer AugustBournonville. Unlike other ballet companies, Robert Joffrey did away with the traditional ranking system, which comfortably placed dancers in a particular role due to their ranking. Robert Joffrey rather adopted an ensemble group that was versatile and could change leading roles, and this resulted in a stronger sense of unity.

Robert Joffrey was the co-president of the International Dance Committee along with Bolshoi Ballet Director Yuri Grigorovich. Robert Joffrey was a member of the National Council of the Arts and a juror for Denmark’s Hans Christian Andersen Dance Awards.

Robert Joffrey had a long-term romantic relationship with Gerald Arpino, his co-director. Due to his sexual activeness and promiscuous lifestyle, Robert Joffrey contracted HIV/AIDS, and the shame and stigmatization, which came with it made him hide it to himself. His health deteriorated and died of the disease on March 25, 1988, at age 57 in New York City. Robert Joffrey was buried at the Cathedral of Saint John Divine. To avoid his company being stigmatized and reputation kept intact, his obituary listed organ failure as his cause of death.