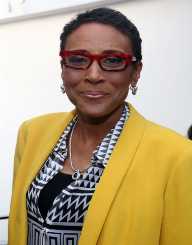 Robin Roberts was born as Robin Rene Roberts on the 23 November 1960 in Alabama. She had three older siblings and was raised in Pass Christian, Mississippi to Lawrence Roberts and Lucimarian Tolliver. Lawrence Roberts was a Tuskegee Airmen, a group of African-American military pilots who served in World War II (1939-1945).

Robin Roberts graduated from Pass Christian High School (1979). She was keen on sport at school and played tennis and basketball. She then enrolled at Southeastern Louisiana University and obtained a degree in communication (1983).

Robin Roberts' first job in the media was as a sports anchor and reporter with WDAM-TV in Hattiesburg, Mississippi (1983). In 1984 she was with WLOX-TV in Biloxi, moving to Nashville, Tennessee in 1986 where she worked as a sports anchor and reporter for WSMV-TV. She then proceeded to Atlanta, Georgia where she was employed at WAGA-TV in a similar position (1988-1990).

The combination of Roberts and Stephanopoulos was a popular choice, and the show regained its place as the top morning show in America (April 2012) by beating NBC’s Today in the ratings for the first time in over a decade. Roberts hosted the Academy Awards pre-show for ABC in 2009 and 2011.

Robin Roberts has been a relationship with Amber Laign since 2005.