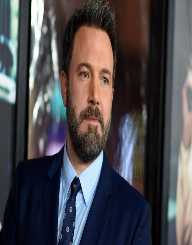 Benjamin Geza Affleck-Boldt is an American actor and a Filmmaker.  He started his career as a child actor.

Ben Affleck was born to the couple Timothy Byers Affleck and Christopher Anne on August 15, 1972, in Berkeley, California. His mother was a Harvard educated elementary school teacher.  His father worked as an auto mechanic, a carpenter, a bookie, an electrician, bartender and a caretaker at Harvard University. He was an actor and stage manager with a Theatre Company of Boston. The family moved to Cambridge.  His father was an alcoholic.   The couple separated in 1984.  Affleck and his younger brother Casey lived with their mother.

His father was moved to a rehabilitation center where he worked as an addiction counselor. Affleck made contacts with his father as an adult. His mother used to take Affleck and his brother regularly to the theatre and encouraged to make their home movies. His mother’s friendship with casting director helped the brothers to audition for commercials and film production.  Affleck first acted at the age of seven.  His mother wanted Affleck to become a teacher as she thought the acting was an insecure job.  David Wheeler was Affleck’s guide.

Affleck, when he was thirteen, he filmed a TV programme in Mexico and learned to speak Spanish and spent traveling with his mother and brother.

Affleck studied in University of Vermont and learnt Spanish. He left the University without credits. He moved to Los Angeles when he was eighteen to study Middle Eastern affairs at Occidental College. Here also, dropped out when a professor did not accept Affleck’s screenplay draft, Good Will Hunting.

Affleck and his high school friend, Matt Damon, were inspired by their drama teacher, Gerryn Speca. The friends discussed their plans of becoming actors. They traveled to New York for acting auditions.

He appeared in the ABC after-school special Wanted: A Perfect Man, in 1986, Hands of a Stranger in 1987, a commercial, Burger King in 1989. Affleck moved to New York in search of acting work. Affleck directed student films while studying at Occidental College in Los Angeles. He acted as a son of Patrick Duffy in the television movie Daddy in 1991 and as a basketball player in “Buffy the Vampire Slayer” in 1992.  He also had roles in NBC television series “Against the Grain” in 1993, in Body to Die For: The Aaaron Henry Story in 1994, and Dazed and Confused in 1993.

He starred as an aimless art student in the college drama Glory Daze in 1995 and in a comedy” Mallrats” in 1995.  Affleck made friendship with writer-director Kevin Smith.  Smith wrote a lead role for Affleck in a romantic comedy “Chasing Amy “in 1997.  This role proved a milestone for Affleck.  The reviews from the New York Times and other papers were very encouraging.  In 1997, he acted as a Korean War returned veteran in the drama, “Going All the Way.” The 1997 action in Good Will Hunting was a turning point for Affleck. The play was sold to Castle Rock in 1994.  The film was a success.

Armageddon, a film made in 1998, brought success to Affleck and was recognized as a leading man for Hollywood films.   In stared in two more films, Shakespeare in love, with his girlfriend and a horror film, Phantoms.  The film, Shakespeare in Love won seven Academy Awards and The Best Picture Award.

Dogma, a film by Affleck and Damon was the premier in the 1999 Cannes Film Festival.  Affleck stared on the screen in, Forces of Nature, And 200 Cigarettes.

In 2000, Affleck observed the directional skills of John Frankenheimer during the production of the film, an action thriller Reindeer Games. He also voiced for Joseph in Joseph: King of Dreams. He stared in many other films.

Affleck and Damon started, Pearl Street Films, a business venture, in 1998. Their next production company, LivePlanet was a success with a documentary Series, Project Greenlight.  This documentary was nominated three times for Primetime Emmy Award for Outstanding Reality Programme in 2002,2004 and 2005.  LivePlanet shifted from multimedia to producing feature films and signed a contract with Disney in 2002 to 2007.

Affleck’s relations with Jennifer drew much media attention in 2003.  The reviews of some of his film production were poor. Affleck took a career break in 2005 till 2006. He returned to stage in 2006 and his performance inPeter Travers of Rolling Stone was acclaimed. He was awarded the Volpi Cup at the Venice Film Festival and nominated for a Golden Globe for Best Supporting Actor. And many more films to his credit

Affleck made his debut as director for the film Gone Baby Gone in 2007. The reviews were good. In 2009, he featured in three films. He then directed a crime drama, The Town in 2010, Argo in 2012.  Argo won the Academy Award, Golden Globe Award and BAFTA Award for Best Picture. Affleck won The Golden Award, Directors Guild of America Award and BAFTA Award for Best Director.

Affleck founded a non-profit organization, Eastern Congo Initiative(ECI) in 2010. ECI grants funds to Congolese charities.  ECI also aims at public awareness in policy change in the US. He has served on many philanthropic organization.

Affleck requested Senator to allocate funds for stem-cell research. He is now a supporter of Paralyzed Veterans of America.  He held a benefit show for them, in 2010, The Town.  In 2007 and 2008, helped at National Guard Armory in California, sent packages for overseas force. He is a supporter of Boston based cancer charity, The Jimmy Fund.

In 2010, raised funds for the charity during premiere, The Town.

Affleck is a member of Feeding America’s Entertainment Council.  He packed food boxes at its event in Denver in 2008.  He contributed an article for The Huffington Post on food insecure population.

Affleck is affiliated to Democratic Party of US.  He was a panel guest On Real Time.  He has discussed politics on channels on many occasions. In 2000 Affleck spoke in the Harvard University in support of higher wages for all workers in the University.  Similarly, he spoke in many organizations for increase in wages, unionization of low paid hospital workers, for universal health care, quality health care for all Americans.

He even criticised Bush tax cuts on several occasions. In 2000, he strongly supported woman’s right to choose.  He supported Gay marriage.  He did not support the death penalty.

In 2006, he supported Senator Barack Obama seeking reduction in petroleum consumption in favour of alternative energy.

Affleck spoke in support of the Anti-Nuclear Terrorism in a Press Conference in 2002 with New York Senator Chuck Schumer.

During the 2008, presidential campaign, he supported Barack Obama

Affleck has received a several awards and nominations for acting, writing and directing the films. – AACTA Awards, Academy Awards, African-American Film Critics Association, Alliance of Women Film Journalists, to name a few and several others.