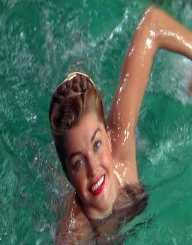 Esther Williams was an awarding winning competitive actress and Swimmer during the 1940’s to 1960s. She made appearances in films such as ‘Andy Hardy’s Double Life’ and won a Henrietta Award for World Film Favorite Female in 1952.

Esther Williams is the youngest child of Louis Stanton Williams and Bula Myrtle born on August 8, 1921. Her father died in 1929 due to colon burst. In 1935, her mother invited Buddy McClure to live with them after he lost his mother. However, on one night when the rest of the family had left to visit relatives, he raped her forcing her mother to banish him from their home.

She enrolled at Washington High School in Los Angeles where she graduated in 1939. While at school, she served as a class vice president and later as President. After her high school graduation, she could not enrol at the University of California due to a D she had in algebra. She chose to attend Los Angeles City College where she retook the course.

Esther Williams worked as a stroke girl to earn money for her tuition fee and modelled for clothing’s in a department store.

During her youth, Esther Williams was a passionate swimmer. She took a job for towel counting at the local pool to save enough money as the entry fee. In 1939, her Medley team set a record for the 300-yard relay at the Los Angeles Athletic Club and won the 100-meter freestyle in 1 minute 09.0 seconds.

At the age of 16, Williams had garnered three US national championships in breaststroke and freestyle swimming. Later on, she joined the Aquade Show as a replacement for Eleanor Holm. She partnered with an Olympic swimmer, Johnny Weissmuller in the Golden Gate International Exposition until the show ended on September 29, 1940.

In 1941, Esther Williams signed a contract with Metro-Goldwyn-Mayer which entailed getting a guest pass to Beverly Hills Hotel which contained a pool. This agreement provided to her an opportunity to swim every day and make appearances on camera, acting, singing and dancing.

After the World War broke, Williams took hospital tours until the1950’s. In 1940, William screen-tested alongside, Clark Gable in the film, ‘Somewhere I’ll Find You’ and made appearances as Sheila Brooks in ‘Sandy Hardy’s Double Life.' This performance followed a starring role as Spencer Tracy in the film, ‘A Guy Named Joe’.

Also, she played the role of a swimming instructor fiancée in ‘Bathing Beauty’ alongside Red Skeleton and appeared as herself in the film, ‘Ziegfeld Follies’ followed by the musical, ‘Thrill of a Romance.' This movie became the 8th grossing film of 1945. She also appeared in ‘Easy to Wed’ alongside Johnson and Lucille Ball.

In 1947, she starred as Ricardo Montalban’s twin in ‘Fiesta Brava’ and appeared in the romance, ‘This Time for Keeps’ with Johnnie Johnston.

In 1948, Esther Williams signed a contract with the Cole of California swimwear company which entailed wearing their swimsuits. On one occasion, her plaid flannel swimsuits that she wore for the ‘Thrill of a Romance’ became so heavy that it dragged her to the bottom of the pool forcing her to remove it and swim naked to avoid drowning. She then modelled for the Cole swimsuits for the Secretary of the Navy resulting in a sale of 50,000 suits for the United States Navy.

A year later, she filmed ‘Take Me Out to the Ball Game’ which became the major commercial success and ranked 11th highest earning film. The same period she played in ‘Neptune’s Daughter’ with co-stars Ricardo Montalban, Red Skeleton and Betty Garrett. She also sang in ‘Take Me Out to the Ball Game,' ‘Baby, and 'It's Cold Outside' which won Academy Award. The performance, followed her role in ‘Duchess of Idaho’ and  ‘Pagan Love’ in 1950, ‘Callaway Went That way in 1951, ‘‘Skirts Ahoy’ in 1952 and ‘Jupiter’s Darling’ in 1955.

Notably, in 1952, Esther Williams played the role of Annette Kellermann, costarring with Victor Mature in ‘Million Dollar Mermaid’. This role was followed by ‘Dangerous When Wet’ in 1953 and a non-musical dramatic film, ‘The Unguarded Moment’ in 1956. By and large, she was involved in an induction in the International Swimming Hall of fame.

In 1999, she co-wrote with Digby Diehl in the autobiography, ‘The Million Mermaid’ and appeared in a Swedish book, ‘Esther Williams –Skenbiografin’ written by Jane Magnusson. Sadly, in 2007, she suffered a stroke but appeared in April 2010 in ‘Turner Classics Movies’ alongside Betty Garret.

During the 22nd Grammy Awards in 1949, Esther Williams won with 'a Baby; it's cold Outside' which won Academy Award for Best Original Song. She earned a Henrietta Award for World Film Favorite Female in 1952.

Esther Williams died at the age of 91 on June 6, 2013, due to natural causes and was cremated while her ashes were thrown in the Pacific Ocean.