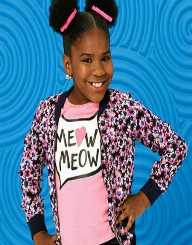 Trinitee Stokes is an American child star and actress who is best known for her role in K.C Undercover.

Trinitee Stokes was born on 12 April 2006 in Jackson, Mississippi. Stokes lives with her parents Ron Stokes and Kia Stokes. The family moved to Los Angeles to help with Stokes’ career. Stokes began acting at age three. She would perform in local theatre groups.

Stokes’ acting career started with some national commercials. Stokes appeared in some advertisements for major brands. Stokes acted in an advertisement for the breakfast cereal manufacturers Kellogg’s and the fast-food chain McDonald's. She appeared in some short films starting in 2013 with a short comedy called Daddy and Me. Stokes appeared in another two shorts before her first feature film called Red Phone and Missi. Stokes landed her first feature film role in the 2015 movie Tempting Fate. The film was a Nigerian production, directed by Kevin Nwankwor.

Stokes played a minor role in the film. In 2013, Stokes hosted an episode of The Designer Kids Project, an American TV documentary. On the show, Stokes unveiled her clothing line, Designs by Trinitee. Stokes was taught to sew by her father. Stokes often appears in public wearing her label. She has displayed her collections at the Fashion Fest Live show in Los Angeles. Stokes landed her best-known role in 2015 when she first appeared in the Disney Channel show K.C Undercover as Judy Cooper. The show is set in Washington D.C and follows K.C Cooper a teenage math genius who carries out undercover work to save the world from a group known as the Other Side. Stokes plays K.C Cooper’s robot sister.

Stokes character is a sarcastic robot that has the appearance of a ten-year-old girl. Stokes character’s full name is Junior Undercover Digital Youth Cooper. The show has aired two seasons and fifty-one episodes. The show is broadcast on Disney Channel’s across the globe from New Zealand to Canada. Stokes has also made guest appearances in shows. She appeared on another Disney Channel show, Austin & Ally. She has also appeared in the comedy show Teachers which is produced by TV Land.

Stokes has also performed voice work for Disney. She provides the voice to the Princess Tiana doll released by Disney. Princess Tiana is the main character from Disney’s 2009 film, The Princess and the Frog and is Disney’s first black princess. She also made a guest voice-over appearance in the Disney Junior’s TV series Doc McStuffins.

Stokes appeared in the 2015 short film, That One Smile. The film is about two sisters who get separated at birth, and Stokes plays a young version of Marcy, one of the main characters. Stokes has also released two music singles. The first single, released in 2013, was a gospel single titled, Win Now. Her second single, Miss Me, was released in 2017.
Philanthropy