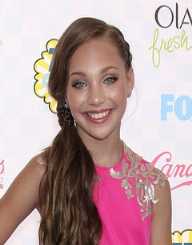 Madison Nicole Ziegler commonly referred to as Maddie Ziegler is an American actress, model, and dancer born on September 30th, 2002. She began her career in acting at such a young age. She was only eight years old when she was featured in Dance Moms. This is a reality show in which she appeared in until 2016.  She particularly became more famous after her appearance in five of Sia’s music videos. Among these videos was the hit songs "Elastic Heart" and "Chandelier".

She has also featured on other TV show dances. Her stunning beauty has earned her a place in many covers of magazines. The multitalented Maddie Ziegler has also appeared in scripted shows as a guest. She was ranked among the "30 most influential teens" survey by Time magazine both in 2015 and 2016.

Maddie Ziegler was born on September 30th, 2002. Her place of birth is in Pittsburgh, Pennsylvania located in the United States of America. She is the daughter of Kurt Ziegler and Melissa Ziegler-Gisoni. In 2001, her parents parted ways following a divorce. He mother got married once again to her stepfather, Greg Gisoni. He is employed at Westinghouse Electric Company and serves as the vice president of the company.

She has a sister called Mackenzie. She is younger than her. She is also a talented dancer like her sister Ziegler. The two featured in Dance Moms. She has for older stepbrothers. Two of them are from a previous marriage of her biological father.  The other two, on the other hand, are the sons of her stepfather.

Maddie Ziegler’s acting and dancing talent was realized at a young age. She, therefore, enrolled in dancing classes when she was only two. At the age of four, she enrolled in the Abby Lee Dance Company. Among the dancing styles, she learned include tap, lyrical, ballet, contemporary, jazz among others. Her rise to stardom came to her early in life, unlike other actresses. Since then she has been offered a role to play in some TV programs.

Maddie Ziegler’s career began when he was a student at the Abby Lee Dance Company. She represented the company in dance competitions of all levels. During this time the young talented girl was awarded many awards and titles. In 2010 for instance, Maddie Ziegler was honored with the Dancers Choice Award. This was for winning the 17 and under favorite dancer. Later in 2011, she featured in Dance Moms along with her sister and mother. She was only eight at the time.

Maddie Ziegler appeared in the music video "Chandelier" in 2011 at the age of 11. The song was a huge hit hence made her quite famous. In 2016, Maddie Ziegler was among the judges of So You Think You Can Dance: The Next Generation. In the fall of 2016, she toured North America along with Sia. At the beginning of 2017, she traveled to Australia.

She was accompanied by her sister. In the same year, her 2017 memoir was released. The title of the memoir is The Maddie Diaries. It is among the top selling features in New York City. She is featured in 2017 The Book of Henry film.

Maddie Ziegler is known to be a Philanthropist. She is among the partners of Starlight Children's Foundation along with her sister and her mother. Their aim in joining efforts with the foundation was to help chronically ill youth to get noticed. The organization has then listed her with her sister among their list of charitable young celebrities of 2016. She has great charisma and is quite a flexible dancer.