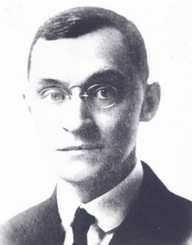 Joseph Erlanger was an American Neurologist and Physiologist born on January 5th, 1874. He shared the 1944 Nobel Prize in Physiology or Medicine with his associate Herbert Gasser. This was for their work on fibers of a single nerve. Herbert Gasser was a one time student of Joseph Erlanger. He later became his great associate in conducting researches until  1931. He conducted many types of research in the field of neuroscience which was of great impact. His initial researches before neuroscience were in cardiology.

Joseph Erlanger was born on January 5th, 1874 to Jewish immigrants. His place of birth was  San Francisco in California. He was the son of Sarah Erlanger and Herman. He was the sixth child of the couple.

Joseph Erlanger attended the Lowell High School situated in  San Francisco. He completed his studies in the school in 1892. He then joined the University of California in Berkley where he studied chemistry. By 1895 he attained his Bachelor’s degree.  Later in 1899 attained his M. D degree in medicine from the Johns Hopkins University. The university is located in Baltimore. After his graduation, he became an intern in the John Hopkins hospital. A year later he received a position at the medical school of the Hospital.  He served as an assistant in the Department of Physiology and later became a lecturer.

In 1901, Joseph Erlanger had his first publication which was on canines’ digestion system. William H Howells, a physiology professor was quite impressed by this work. He, therefore, offered Erlanger a job as an assistant professor. After a while he promoted him to be his Associate Professor.

He was appointed as a professor at the Medical school of the University of Wisconsin in 1906. He became the first Physiology  Professor ever in the history of the University.  Meanwhile, he continued his researches with assistance from his student Herbert Gasser. Gasser later became one of the greatest physiologists. He maintained the same role later in 1910 at the Medical School of Washington University situated in St. Louis. The university gave him great financial support towards his research work. He served in the University till his retirement in 1946. Before his retirement, he was appointed as the chairman of the medical school of the university.

In 1922, Joseph Erlanger together with his former student Gasser came up with a device that assisted in nerve action studies. This device was a cathode ray Oscilloscope, an advancement of the electroencephalograph. The device aided their research in identifying many types of neurons. His associate Gasser later joined the Cornell University. This marked the end of a great partnership that had developed between them.

His wrote the book Electrical Signs of Nervous Activity was published in 1937. He also came up with a device called Sphygmomanometer. This device enabled blood pressure to be measured from the brachial artery.  Subsequently,  he continued his research on the circulatory system. In 1944, he shared the Nobel Prize in Physiology or Medicine with his associate Herbert Gasser.

In 1906, Joseph Erlanger tied the knot with Aimée Hirstel. Together they had three children: Margaret, Ruth Josephine, and Herman. His wife died in 1959. In the same year, his son Herman also passed on.

Joseph Erlanger succumbed to heart disease on December 5th, 1965. He died at St. Louis in Missouri. He was 91 years old at the time of his death.