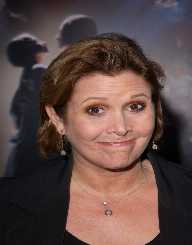 Carrie Frances Fisher is an actress, writer, and humorist from the United States of America. Born on October 21, 1956, she is known for her role as Princess Leia in the Stars Wars films. Her performance earned her three Saturn Awards nominations. The talented actress made a television debut in Debbie Reynolds and the Sound of Children in 1969 and a film debut in Shampoo, 1975.

She has since then starred in numerous television productions and films. Fishers works include The Blue Brothers, The Burbs, Soapdish and The Women. The astute actress appeared in the television series 30 Rock and Catastrophe, which earned her nomination for the Primetime Emmy Award for Outstanding Guest Actress in a Comedy.

As a writer, Carrie Fisher wrote the semi-autobiographical novels like Postcards from the Edge and Wishful Drinking. She was also an activist for women causes, animal right, and LGBT advocacy. Fisher posthumously received Grammy Award for Best Spoken Word Album in 2018 and made a Disney Legend in 2017.

Carrie Frances Fisher was born to actor and singer Eddie Fisher and Debbie Reynolds on October 21, 1956, in Burbank, California. At the age of two, her parents divorced. Fisher had two half-sisters Joely Fisher and Tricia Leigh Fisher from her father’s third marriage to actress Connie Stevens. Her mother also married Harry Karl in 1960 and divorced in 1973.

Carrie Fisher was 17 years then. Growing up, Fisher was known as a bookworm by the family because she was always found reading. She received education at Beverly Hills High School. At age 15, she dropped out from school due to a career on Broadway. She later in 1973 enrolled at London’s Central School of Speech and Drama for 18 months. She continued at Sarah Lawrence College but dropped out without graduating.

After some roles on Broadway and television productions, Carrie Fisher finally made a film debut playing the role of Lorna Karpf in the comedy Shampoo, 1975. Her biggest role was in the George Lucas science-fiction film Star Wars in 1977. She played the role of Princess Leia opposite Harrison Ford and Mark Hamill. The film was commercially successful. She later reprised the role in the production of Star Wars Holiday Special in 1978.

She continued her performance in Ringo, 1978 and the ABC-TV film Leave Yesterday Behind. In 1980, she reprised the role of Princess Leia in The Empire Strikes Back and in Return of the Jedi in 1983. Carrie Fisher featured in the Broadway production Agnes of God in 1982. Her films include The Time Guardian, 1987, The Burbs, 1989, Drop Dead Fred, 1991, Screams 3, Catastrophe, 2014, Star Wars Episode VII, 2015 and Wonderwell among several others.

She followed it with the novels Surrender the Pink, 1990 and Delusion of Grandma, 1993. Carrie Fisher wrote the episode Arsenic and Old Mom of the sitcom Roseanne and was uncredited for the script work for movies like The Wedding Singer, Outbreak, Lethal Weapon 3 and Stop! Or My Mom Will Shoot. She wrote Wishful Drinking and performed it at the Geffen Playhouse in Los Angeles from November 2006 to January 2007. She followed it with the autobiographical book also titled Wishful Drinking in December 2008.

In 1977, Carrie Frances Fisher dated musician Paul Simon who she met while filming Star Wars. They dated until 1983. She then engaged to Canadian actor and comedian Dan Aykroyd in 1980 but later returned to Simon. Carrie Fisher and Simon married in August 1983 and divorced in July 1984. After the divorce the two dated. Her next relationship was with Bryan Lourd with whom she had a child Billie Lourd in 1992. Fisher stated in her autobiography The Princess Diarist that she dated Harrison for three months while filming Star Wars in 1976.

Carrie Frances Fisher died on December 27, 2016, at age 60. She had suffered a medical emergency while on a commercial flight from London to Los Angeles on December 23, 2016. A passenger seated by her noticed she has stopped breathing and reported it. A CPR was performed on her by another passenger until the arrival of paramedics. After the plane landed, she was rushed to the Ronald Reagan UCLA Medical Centre where she was placed in a ventilator. She died four days later.

According to the death certificate issued by the Los Angeles County Department of Public Health on January 9, 2017, Carrie Fisher died from "cardiac arrest/deferred." However, according to the full report issued on June 19, 2017, Carrie Fisher  had traces of cocaine, heroin, MDMA and other opiates in her system but was unsure when the drugs were taken. Her remains were cremated and ashes held in a giant novelty Prozac pill.

Carrie Frances Fisher was awarded the Golden Heart Award for her work with The Midnight Mission in 2014. She received the Fisher its Annual Outstanding Lifetime Achievement Award in Cultural Humanism from Harvard College in 2016. She was an honorary board member for the International Bipolar Foundation. She received a posthumous Grammy Award for Best Spoken Word Album in 2018 and made a Disney Legend in 2017.

Carrie Frances Fisher  was very open on her drug use and bipolar disorder. She discussed her addiction to cocaine and other prescription drugs and her medical condition during her appearances on The Secret of the Manic Depressive and 20/20 with Stephen Fry.

Carrie Fisher revealed that she uses Percodan, a pain medication as a form of self-medication to control the manic side of bipolar disorder. According to her, drugs made her feel normal. In an interview, she revealed her use of cocaine during the filming of The Empire Strikes Back.