The Rabbits are shy and reserved. They can also be sensual. Firstly, they would rather have a party at home with close friends than go out. Secondly, they view things more subjectively. On the other hand, the Snakes are well-liked. They have an inherent charisma and smart nature. Above all, they are known for their instincts and philosophical way of thinking.

Snake Rabbit Chinese compatibility encourages these two to exercise humility all the time. They are always there for one another. They know how it feels to be alone. Working together has helped them to improve their confidence and have high self-esteem. Together, they have learned how to forgive others not because they deserve it but because they need peace. 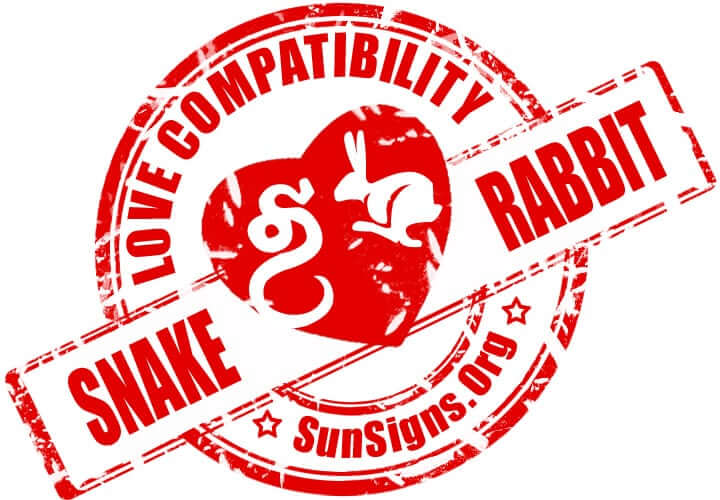 In a Snake and Rabbit marriage, both tend to fit fairly well together. They share interests that make them fit for each other. Firstly, both enjoy material things. Secondly, both will have to work past issues to be happy together. Above all, they can be very peaceful together. They will end up having great sexual satisfaction in bed.

Rabbit Snake in love shows the manifestation of true happiness. These two can plan to go out on a weekend. They enjoy each other’s company. Spending time together always helps them to strengthen their relationship. They spend time as a way of bonding. Spending more time with each other also helps them to know and understand each other’s differences.

The Snake’s insecurity can lead them to feel envious of their partner. Both these Chinese astrology signs will need to work on their identities. But the good news is that they might be able to do it together.

Snakes are domineering, but the Rabbit will be receptive to the way the Snake thinks. They will not be that angry if their partner is busy with work-related things. At the same time, neither will they be compromising with each other. If they are not careful, they might begin to forget about each other. They tend to focus on their individual goals.

A Snake wife and Rabbit husband might have arguments because of the Snake’s spending habit. The male Rabbit will watch the family’s finances very closely. As a result, they might feel their partner is irresponsible. Both will be able to have a good conversation until they find a solution.

Chinese astrology compatibility predicts that a Snake husband and a Rabbit wife will seem to be a perfect couple. They will both be social, charismatic people but also somewhat temperamental. Sometimes the male Snake will lack responsibility. This will force the Rabbit woman to take charge.

Snake and Rabbit Chinese compatibility indicates that these two always make efforts to know each other. There are times when they do opposite things but still find time to be together. They care about their connection. When they are far from each other, they keep in touch through various mediums of communication. Their closeness to one another encourages them to come up with events that make them spend time together.

The Rabbit male will never twist what the Snake female says to make themselves look innocent. Firstly, these two will always build on each other’s words. Secondly, they try their level best to do what is best for them. Whenever something bad comes between them, they both choose peace over drama. They also understand that they both come from terrible backgrounds. They choose to love each other despite their differences.

These two will be able to make each other’s better attributes stand out. There is a chance the Snake man could at times be asking too much of the female Rabbit. Both might have issues when it comes to being egotistical and having a lack of confidence. Their relationship can break up if they become more pessimistic. These two might also argue over money.

Snake and Rabbit marriage compatibility is anchored on prayers for each other every day. For example, others find the spiritual bond between these two to be very attractive. Their prayers for one another encourage them each day to live a good life. Above all, they both can count on each other for help at any time. 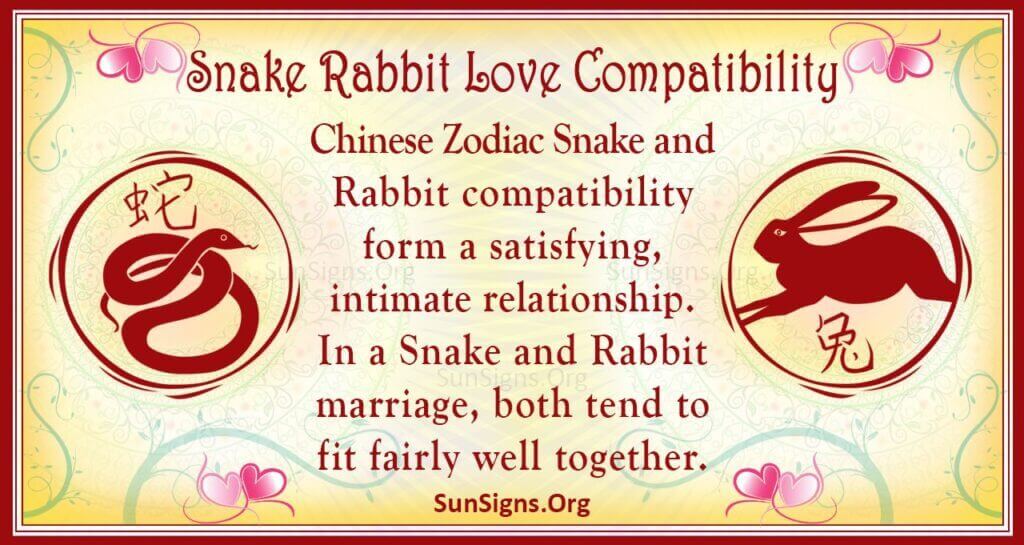 The Snake and Rabbit soulmates might have issues when it comes to feeling insecure. For example, the Rabbit man will require a lot of encouragement from others to maintain stability. Similarly, the Snake woman might not give their partner what they need. They have many insecurities.

Snake and Rabbit friendship compatibility encourages them to forget about their past and to observe others as they work for their goals. As a result, they choose to live their present life to the fullest. Firstly, they have grown strong together. They cannot let people harass them. Secondly, they move away from people who judge them. Thirdly, growing together has made them realize that they are happier when spending time together.

Chinese horoscope compatibility illustrates that acts of kindness do change one’s life forever. Rabbit man and Snake woman always hang out together. they have a lot to learn from each other. They do not tolerate disrespect from each other. Staying together has helped them to delete negative people from their lives.