The Tiger is confident, straightforward, and self-sufficient. They are both open-minded and free spirits. However, they will want to be in control of everything they can. They can be natural in a leadership position. They are energetic and tend to have the necessary smarts to move both business and others along. The Snake is more reserved than that. They will depend on their inherent charisma to get what they want. 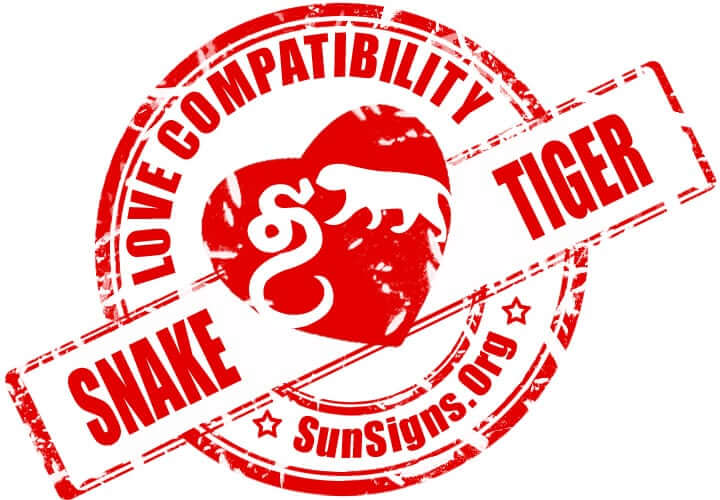 The two Chinese zodiac Snake and Tiger soulmates do not seem to have enough in common to bond over. Both can be very laid back, but typically only if they are getting what they want. Because of this, they might have issues together.

In the Snake male and Tiger female relationship, both will be sexually appealing. Because of this, they might be attracted to each other immediately and start dating. The male or female Tiger will have a magnetic personality that the Snake will find hard to ignore. Additionally, they will be attracted to the male or female Snake’s seductive charisma. Eventually, both will figure out they do not have many similarities.

The Snake man or woman will be envious because they have inner insecurity. They require a partner who will give them a lot of emotional encouragement and reassure them they have nothing to worry about. The Tiger man or woman will not be likely to give them what they need. Tigers are kind-hearted and have a sense of nobility, but they will not like having an envious partner. They might feel they are being held back. If this kind of behavior continues, then likely, the Snake and Tiger will break up.

The Caring Nature Of Snake & Tiger

The Tiger male will always support the Snake female in her endeavors because he is caring. They might not necessarily have a love affair, but they are very soft towards one another. Most of the time, the Snake will always be peaceful around the Tiger. As a result, They will work towards supporting each other’s dreams as one way of maintaining their peace.

The Chinese Tiger animal sign is very outgoing and does not like the Snake keeping secrets or being as driven. At the same time, the Snake is brilliant and sophisticated and sees their lover as being brash. However, the Snake and Tiger in love do not communicate well with each other. Because of this, they might find it hard to have a long-lasting relationship. In short, they might be more successful if they opt for a friendship first.

Snake Tiger Chinese compatibility creates an understanding between these two as they get to know each other. They do not depend on each other so much. They are good at sidelining other people who do not fit in their way of life. Their different ways of life make them come together for convenience.

Snake and Tiger Chinese compatibility describes a formal connection between these two people because they do not have many things in common. They are not very different in how they do things. There are things that they will always enjoy doing together. Their connection is straightforward for others to understand. They are both open and always ready to help each other whenever the need arises.

A Snake husband and a Tiger wife will always work hard to tolerate each other. Both will be independent and constantly aware of each other’s flaws. The Tiger will feel they cannot talk to the Snake, probably finding their spouse too blunt. Even in bed, these two are sexually not compatible.

Tiger Snake in love will always happen in countable scenarios. Their friends have tried to match them up, but only a few love stories have survived. They have gone on blind dates to see if they can match, but most have ended in friendships. The best thing about the Tigers is that they will always respect the Snakes.

Snake and Tiger marriage compatibility occurs in specific cases. Once these two decide to get married, they work hard and commit their energies to the success of their marriage. They are good at giving their best in marriage. These two will never be forced to marry each other. They do it out of their own will.

In marriage, the Tiger will spend a lot which might create problems in their relationship. That is to say, the Snake is more cautious about spending money. But their partner will not always want to follow their advice. Tigers are more leaders than followers. These two Chinese zodiac signs will have a difficult relationship. Both are not able to accept or tolerate what they see as each other’s flaws. They both are intense and suspicious. They will have a hard time trusting each other, which predicts the Chinese astrology compatibility.

Snake and Tiger friendship compatibility illustrates a good relationship that is capable of growing as time goes. These two can first get together for convenience but later grow into a family. When these two are friends, they always exhibit a strong connection beyond other people’s expectations. 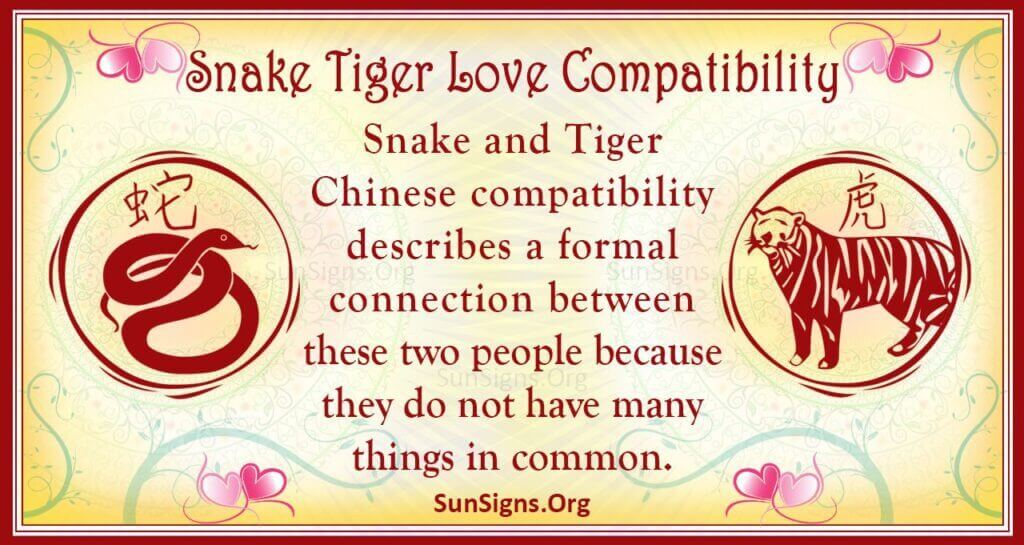 Snake man and Tiger woman compatibility have an admirable mode of communication in their relationship. For example, the Snake man knows how important it is to keep in touch with the Tiger woman. They are both eager and ready to invest in the success of their friendship.

Chinese horoscope compatibility illustrates that these two are never scared of trying out new things in life. As a result, Tiger man and Snake woman friendship is a perfect example of new things that can work out perfectly.