How good or bad is the love compatibility between a Taurus and Pisces emotionally, mentally and sexually? Read on…

Have you ever wondered how compatible are a Taurus and Pisces in love? Do you contemplate how that relationship would be like? Taurus and Pisces soul mates are quite similar in many ways and can actually create a near perfect union. They are both deep thinkers and empathetic to those that they love.

In this Taurus and Pisces love compatibility, both are caretakers who love to make sure that their partner is well taken care of. But they are also different in many ways which can put a stop to a relationship in flight. Here is just how good a Taurus Pisces compatibility is. 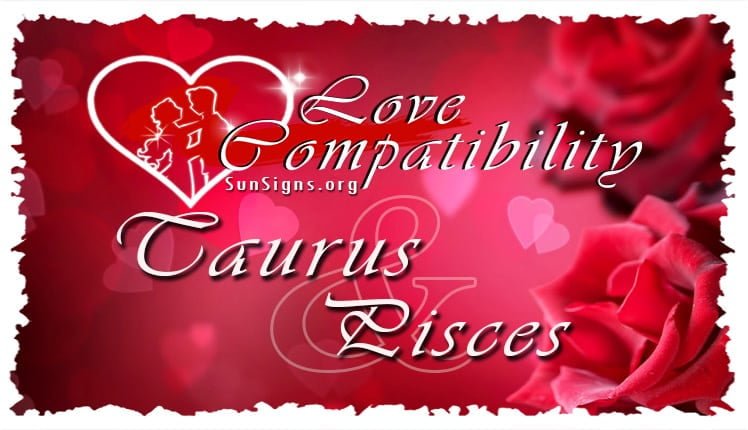 In the Taurus and Pisces relationship, both value family and traditions that come with it. They both enjoy family dinners and reunions especially if they are quite large. They like the notion of seeing family members who are distant and catching up on what has been going on in their lives.

In the Taurus Pisces love compatibility, both also enjoy the traditions that having a close family brings such as holidays, birthday celebrations and school achievements. They love to be the center of attention at these events and even dole out praise to their family members. In the Taurus and Pisces marriage, when they start their own families they make sure to carry on these traditions as a vital source of bonding.

In the Taurus Pisces friendship, both are both empathetic by nature. They are very receptive to those who are in need. They are the first to step up to help a friend or loved one in need. They are great listeners and provide that much needed shoulder to cry on when you are feeling down or lost.

They provide excellent advice when their help is truly needed. They are great at trying to help a person through a problem that seems to be hard to overcome. They like to make sure that their loved ones leave them with a smile and hope in mind.

Taurus and Pisces couple are nurturers that enjoy taking care of others. If you are sick a Taurean or Piscean would nurse you back to health immediately. They watch over you like a hawk guarding her nest. They constantly check to see that you are feeling better and seeing if you’re illness is going to past. They sit by your bedside and are quick to jump to get you anything you need. They always know just how to make sure that you are cured with their in depth knowledge and willpower to make sure that you feel better.

In this Taurus and Pisces compatibility, both are also selfless givers who like to make other people happy by getting them what they want. They go out of their way to get things that may seem extravagant for those that they love. Holidays are a memorable event when a Bull or Fish is around; their gifts are usually the best and the ones that bring on excitement and jealousy. They also give themselves even they do not have the time or feel under the weather. They make sure to be there for their partner and friends.

The Taurus Pisces in bed also have quite a passionate sexual chemistry. Pisces in sex is very imaginative and would push the limits of pleasure with their curious Taurus partner. Pisces men and women are open to exploring all things with the point of achieving ultimate satisfaction.

They like the idea of finding more exciting and wild things to do in bed with their Taurean lover. They both enjoy romancing their significant other especially with flowers, candles, and massages. They both like the idea of romantic getaways where they are the only two on a beach or island. They splurge on romance to the point of excess which both of them enjoy doing, thanks to the sexual Taurus.

With all of these amazing similarities that this Taurus and Pisces compatibility shares, there are also quite some differences that they both bring to the table that can produce a difficult relationship. Taurus is stubborn by nature and does not like to admit when they are wrong or even like to compromise on something that they do not like.

Pisces personality is always open to new things and when confronted with a bull who does not want to compromise on something that Pisces finds interesting would produce constant fights and arguments. Pisces would quickly find someone else who wants to enjoy whatever activity that they find fun which can leave a Taurus feeling guilty and abandoned.

Taurus zodiac are practical and sensible beings who take stock in doing things that are going to produce an outcome that suits them in the long run. Pisces are free spirits who are very imaginative and dreamy; they enjoy adventures and thinking about fantasy. They tend to bounce around from idea to idea without a moment’s hesitation no matter how wild it may be.

This difference in outlook can cause many problems in the Taurus Pisces love compatibility. A Taurus would tire of telling a Pisces to think realistically and to put away childish thoughts. Pisces would fight back by claiming that their lover is boring and not interesting.

Pisces zodiac are very sensitive beings that are quick to become defensive over the little things. Taurus is always even keeled and keeps their emotions at bay but when confronted with an overly sensitive Pisces they don’t know what to do. Pisces immediately fight back when they feel as if they are being attacked or even when they believe that someone has said something hurtful against them.

A wrong word or joke can lead to a very angry fight with a Pisces who would not relent until they get an apology even if there is nothing to apologize for. Taurus would find a formidable partner with Pisces and would always have to take care to watch what they say to them.

In the Taurus Pisces compatibility, the Fish can come off as being weak especially when confronted with tough obstacles. They have a tendency to give up easily or retreat immediately when things seem hard to deal with. Taurus who is competitive and likes a challenge would become uninterested in a push over like a Pisces. They would constantly scold them into standing up and actually confronting whatever they deem as hard. Instead of taking the time to give Pisces support and understanding, Taurus would push Pisces which would only have them run away.

Both Taurus and Pisces zodiac signs are lazy and enjoy lounging around doing nothing all day. This can be fun for both of them at first but when two lazy people are not doing chores or important things problems can arise. They would both be thinking that the other person is going to handle things. This can lead to serious arguments about responsibility and actually not accomplishing anything but a break up of the Taurus and Pisces compatibility.

In conclusion, Taurus dating a Pisces can have a fun and loving relationship due to their emphasis on family and tradition. They both enjoy taking care of each other and people and always make time for one another. But they both have different perspectives on life which can cause many problems especially when one person is not taking things as serious as the other. This Taurus an Pisces love compatibility will work out if they accept each other for who they are. Then this can lead to an amazing relationship that can only grow.