Chinese astrology compatibility predicts that a Snake and Monkey relationship will be opposite with nothing in common. Firstly, will their differences be too much for them to have a successful relationship? Secondly, will the Snake and Monkey signs work through any problems they might have? Thirdly, will understanding and compromise go a long way towards helping these two be successful?

Snake Monkey Chinese compatibility is a relationship that these two are shy about each other as friends. The bond they share is not that strong, for instance. The Snake and the Monkey are good at categorizing each other according to status. others might be proud of their friends regardless of their economic status, but not them. They can only tolerate each other when one needs a favor from the other. 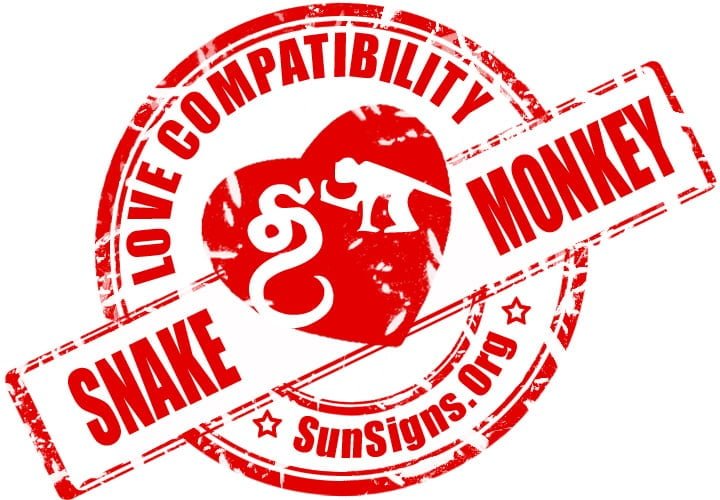 These traits might be how they make their first connection and start dating each other. For instance, the Snake will seem very popular and sexy. But they are more withdrawn than that. Additionally, they are domestic and like spending quiet evenings at home. They would rather be reading a book in a cozy spot than spending time out surrounded by friends. Above all, they are driven, refined, and determined.

Monkey Snake in love cannot love each other at all times. When these two decide to live together, they will fight all the time. There are times when they try to love one another, especially when they have differences. But after solving their problems, they go back to their normal quarreling life. Both the Monkey and the Snake understand that love helps them to commit to one another. But staying in love for a long time is not easy for them. These two take each other’s love for granted.

The Caring Nature Of Snake & Monkey

The problems will start because the Snake is almost always a jealous partner. The Monkey will all the more make them more envious. But also they can be devoted to their partner at times. However, they might potentially cheat on their partner. The Monkey man might be faithful, but he will want to be out with different friends every night. As a result, the Snake woman will get worried. It doesn’t matter what kind of reassurances their partner might give them.

The female Snake and male Monkey marriage compatibility will need both to put a ton of work into the relationship. Both are envious and will suspect the other. Both have positive traits. However, when they are around each other, they only seem to point out each other’s flaws. Ultimately these two seem to bring out the worst of each other’s personalities and break up. If these two want to make the Snake Monkey love compatibility work, they will both have to be honest and straightforward with each other.

Snake and Monkey Chinese compatibility are good at appreciating their simple ways of life by being content with what they have. They might be different, but they are contented with what they have. One good thing about them is that they do not rate other’s success by their appearance. These two can willingly be there for their friends to support them whenever they need their help. The connection between these two can never allow them to run away from each other in times of trouble.

The Monkey male will never look down upon the Snake female just because she is weaker than him. These two know that they can accomplish their goals together faster when they work together. When they live together, they provide for one another at all times. They understand that the universe will bless them if they keep doing good things to one another.

However, the Monkey is more social by nature. For instance, they enjoy getting out of the house and doing something fun. They are always more interested in finding the things that make them happy and doing something daring. Above all, they are friendly, smart, and full of energy.

There are times when their hard work strengthens the Snake and Monkey marriage compatibility. For instance, these two do not easily give up on their marriages. When they do not see any good in each other, they reach out to others for counseling. These two understand that for a marriage to work, there must be consistency in expressing love. They try to tackle their marriage problems together as a couple.

Snake man and Monkey woman compatibility have taught them to listen to each other’s views. For instance, they try so much to apply what makes sense in their marriage. Generally, they know that their marriage might collapse if they are not eager to build it. They rarely go out or on vacation together. Whenever there is a problem of communication in their marriage, they address it asap. 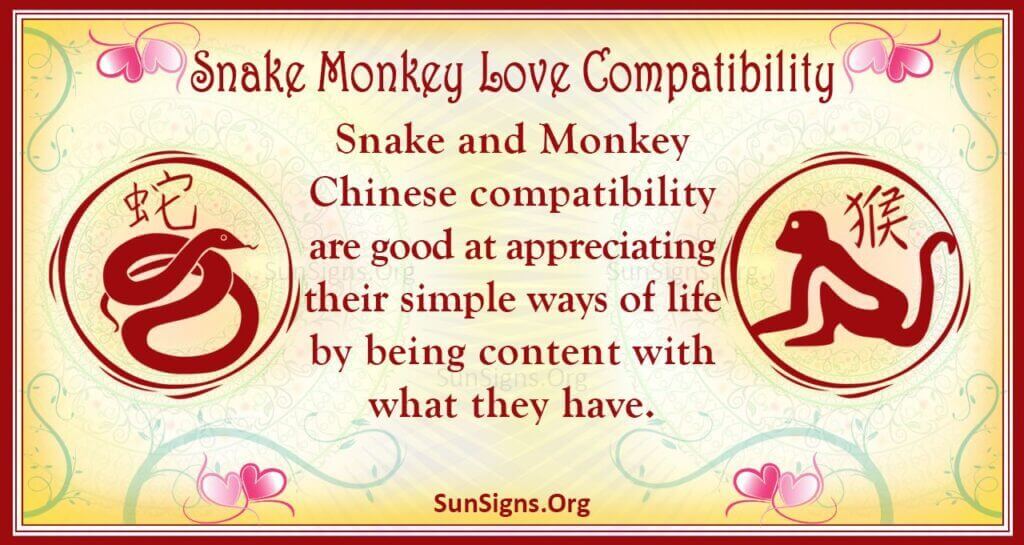 The Snake man and Monkey woman might be able to have a lot of fun in a romantic relationship. In love, the Snake can enjoy being out with the Monkey and a bunch of their friends. They could also form an intense physical connection. To sum up, the Snake and Monkey are vibrant sexual partners in bed.

Snake and Monkey friendship compatibility is still a work in progress. Firstly, they might not be too close all the time, but they know what it means to have friends. Secondly, these two can sacrifice little things that they have to have a good time together. At most times, when one talks, the other one listens keenly.

In a male Snake female Monkey friendship, they are both shrewd and enjoy competition. For instance, Monkeys will be able to make the Snake angry with no trouble at all. They will constantly be coming up with ways to challenge their lover. On the other hand, the Snake does not forgive easily, and they are likely to disapprove of the Monkey and their actions. Above all, they are motivated and used to getting their way all the time.