The two Chinese zodiac signs of the Snake and Rooster in love could make a good couple. Firstly, the Snake is charismatic, well-liked, and sexy. Secondly, The Rooster enjoys getting out of the house and going out with friends. Most importantly, both of them are happy with the coziness and safety of home. The Snake and the Rooster relationship can form a stable bond that shares good love compatibility.

Snake Rooster Chinese compatibility creates an understanding that brings these two more close to one another. For instance, every time they are together, they remind each other about whom they need to spend time with. These two are good at protecting each other from people who want to harm them. Time and attention are the most valuable gifts that they can give to one another. Not everyone will ever understand what brings these two together.

The Snake and Rooster soulmates have several of the same beliefs and morals. They can form a relationship that is contented for both of them. These people are social. They are great together, whether they are friends, lovers, in business together, or family members. When the Snake is dating the Rooster, they might move in together early in their relationship. They will see moving in together as a way to make life better for both of them. 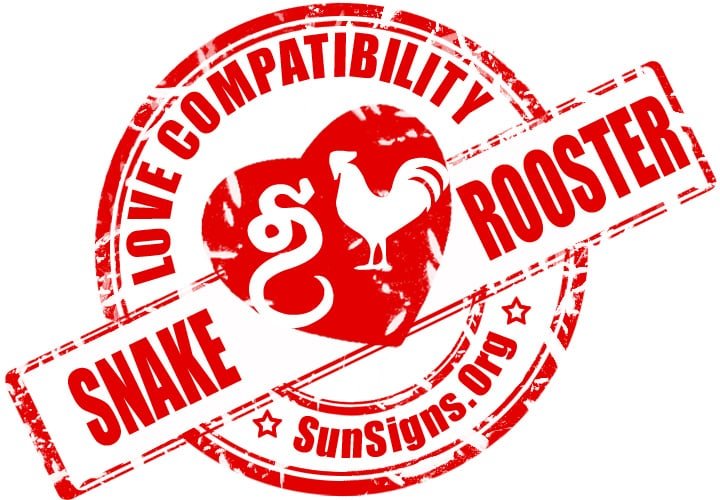 Rooster Snake in love always brings new experiences in their relationships. They are both okay with doing new things that will increase their love for one another. Whenever something bad happens, they will always take time to find a solution. The love they share will always make their life beautiful. The Rooster always yearns to spend time with the Snake.

The Snake and Rooster animal signs enjoy material things. First, they share a strong mental and spiritual connection. Second, both will have the same ambitions of power and material success.

Roosters will keep a clean house. They will try to influence their lover’s thinking. They are energetic, decisive, and fast-paced. Snakes will take care of their partner very well. They will listen, but ultimately they will make their own decisions based on their wisdom. These people are patient, level-headed, and introspective. They will accept the Rooster, and it will appreciate its presence.

The Rooster man could feel the Snake woman was restricting them. Consequently, The female Snake might feel the male Rooster is pushing them too hard into something. The female Rooster is more than capable of boosting the male Snake’s serious mood. They both can make an intellectual connection and have a stable relationship. The Snake and Rooster have the possibility of having their traits balance each other out, or they could cause arguments.

Snake and Rooster Chinese compatibility has created a great connection between these two. They might have differences at some point in their lives, but they still get together amidst their differences. Their connection is open for other people to understand. Most of the time, you will find the Snake talking nice things about the Rooster. Nature seems to have brought them together to make life easier for one another.

The Rooster male will always avoid people who choose to understand his points from their point of view. The Snake female will always take time to believe those who lied to her before. These two characters about others make them trust each other more. They both want to have peace of mind. They do not like a situation where they force to be friends with others. People know that they make good friends when they get to trust someone. They use their energies to help those who appreciate their efforts.

Snake and Rooster marriage compatibility allows them to support each other when they face any struggle in their private or marriage life. When these two are married, they try so much not to be the cause of each other’s struggle. They are keen on saving their marriage from divorce by doing things that build it. Their marriage is admirable because people see them doing interesting things together.

Snake man and Rooster woman compatibility is built on love and respect for one another. If given a chance, the Snake man will gladly choose the Rooster woman all over again. They both do not allow each other to doubt their commitment to one another and their marriage. When they are together, they only consume news that is good for them.

The Rooster woman will welcome being able to count on the Snake man. The male Snake, though, can be envious because of their insecurity. Above all, the Rooster and Snake are sexually compatible lovers in bed.

The Snake and Rooster friendship can form an efficient and profitable team, whether at home or office. They are well suited for a long-lasting marriage. The Rooster is detail-oriented and will keep a home that is clean, cozy, and tastefully decorated. They have excellent style and adore a good deal. They are also devoted and trustworthy and will take excellent care of their partner. To sum up, the Snake is typically lucky with money and will be a good provider. 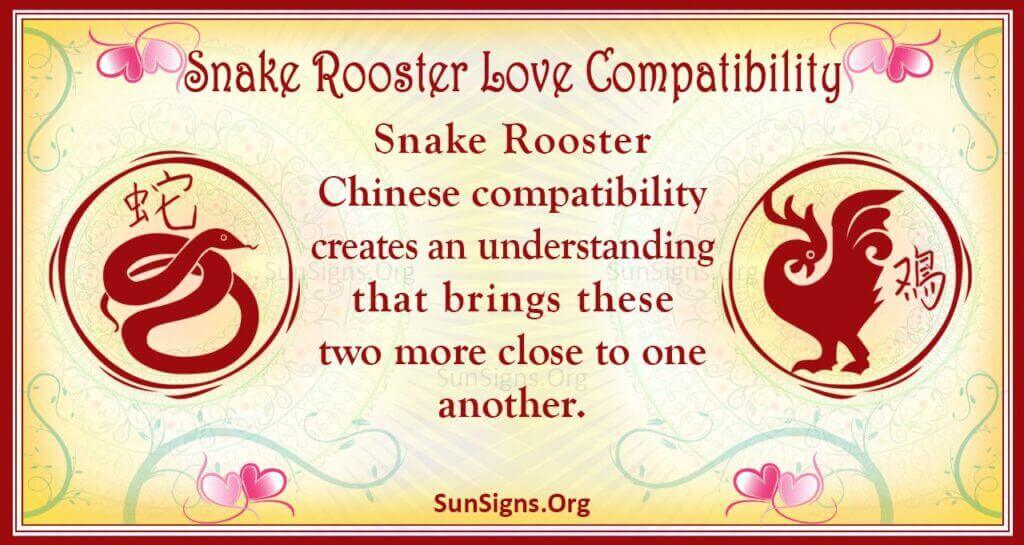 Snake and Rooster friendship compatibility encourages them to treat each other with respect. These two enjoy not only good times together but also bad times. In fact, during bad times is when they show more love for one another. They have learned that they can overcome many obstacles when they work as a team. These two do not push themselves to accept one another. They accept each other just the way they are.

Chinese horoscope compatibility illustrates how these two have mastered the art of checking and correcting each other. When something bad happens in their friendship, the Rooster man and Snake woman will never blame each other. They both take responsibility for whatever happens in their lives.