The ostrich spirit animal is a strange bird. Some people might even have a problem with thinking that it is a bird since it cannot fly, and it is much larger than most other birds. Because this bird is so different from other types of birds, the ostrich animal symbolism varies from other winged creatures. There are countless myths and legends about this bird that make the creature seem almost magical.

Since the ostrich is a large bird, it should be obvious that it had some rather large feathers. The ostrich’s feathers were used in an important ancient Egyptian myth concerning life and death. The Egyptian goddess, Ma’at, was said to help to decide if the souls of dead Egyptians were worthy of going to a heavenly place when they died or if they should destroy them instead.

The goddess would weigh the person’s heart against the ostrich feather. If the heart weighed more than the feather, then she would destroy the person’s soul. If the heart weighed the same or less than the feather, then the person’s soul would get to move onto the next world. Because of this ancient story, the Egyptians thought of the ostrich itself as a symbol of truth and purity. The Egyptians would want to live a virtuous life so that they could pass onto the next world.

Some of these people thought that if you collected enough of the bird’s feathers and hid them in a bush, then a new ostrich would be born from the feathers, basically out of nothing. This is similar to the phoenix myth, who would die and create a new baby phoenix from its ashes.

This myth inspired more symbolism for the ostrich animal totem. The ostrich spirit guide did a great job at representing the concept of life and death, the circle of life. The bird also symbolizes fertility and renewal.

Ostrich spirit animal reveals that your happiness is not measured by the amount of money you have but by the wonderful people around you. Learn to enjoy and appreciate the human capital around you. These are people who understand how you reason and what you do. Keep connecting with people who will help you when you need them. Your happiness is not by chance but by choice.

This animal is always great at decision-making. Ostrich’s meaning indicates that you should learn to make calculated moves. Always pause when you doubt something. Do not make decisions when you are angry. Take a rest whenever you feel tired after a long day at work. Do something that you love whenever you feel stressed. Embrace forgiveness not as a way of tolerating bad behavior but as a way of healing your heart.

Ostrich totem reminds you that things can complicate life at times. Live it the way it is. Struggling to find answers to life problems might make it more complicated. Work with people who stand by you during difficulties to make your life better. Everybody goes through phases in life. Do not worry when you are at your low phase right now. You will always find your way. 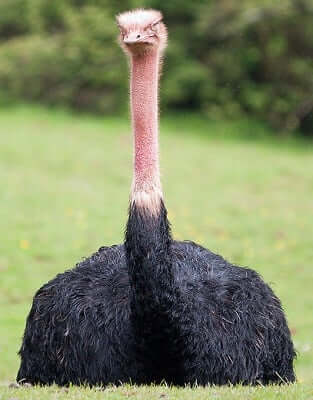 This creature brings you the energies of perseverance. Ostrich’s animal totem signifies that you should never give up when things are not working out for you. Always have second and third plans. When the first one fails, unleash the second one, and life will go on. Aspire to grow from all your plans, whether they are succeeding or failing.

Ostrich symbolism teaches you that it is important to respect yourself. Act responsibly to those you are in charge of. When you are in a leadership position, lead objectively. Always yearn to make a positive difference in everything you choose to do. Do not focus on people who always want to make you feel like you are nothing. Focus on your inner strength to build your life.

The ostrich was large, as was its feathers and eggs. In fact, the ostrich spiritual totem lays the largest eggs out of all of the other birds on the planet. This simple trait made the ostrich very valuable to the people who lived around the animal. The eggs were eaten or sold. Since they were so large, they were a symbol of wealth, abundance, and fertility.

While the ostrich symbolic meaning has many valuable traits connected to it, it has some not-so-nice symbolism. For instance, most everyone knows that the ostrich will stick its head in the ground at times to hide. This symbolizes denial, avoidance, and deception. Because of this, many people think that if you see an ostrich in your dreams, you are avoiding something in your own life. You could also be in denial and need to accept that truth right in front of you. For these reasons, the ostrich animal totem can also symbolize truth.

Overall, the ostrich spiritual totem symbolizes an array of things. Some of the things that they symbolize are contradicting. Humans can still learn something from the bird and what it means. You shouldn’t be like the ostrich and stick your head in the sand when something goes wrong. The rest of the world is still going on around you. And frankly, even ostriches’ look silly when they do that. Instead, take in the wonder of the large bird and its eggs. Know that it symbolizes abundance and all of the other wonderful things in the world.

What do ostriches symbolize? The presence of ostriches around you symbolizes that it is important to play with kids. They are the best people to end your sadness. Kids are very jovial, and when they get mad, they easily forgive and forget. Smiling in the middle of your pain is one way of healing. Your pains should make you stronger, and your tears should make you braver. Come out wiser from things that break your heart.

Seeing an ostrich meaning illustrates that you need to keep people who make your life flow easier. Enjoy the company of people who make you laugh a lot. Life is all about fun, and you are in charge of creating your own fun. Always be thankful to the few people in your life who listen to you without judging you. Appreciate friends who love you without conditions.

There are other Southern-more African myths about the ostrich that helps to define the animal’s symbolism. Much of the wonder about the ostrich comes from its large size and the large eggs that the bird lays occasionally. The people who lived near the ostrich would sometimes take the bird’s eggs to eat. Of course, the bird’s feathers were also important to these other groups of African people.

What are Ostrich Dreams?

Ostrich appearing in your dream tells you not always to trust people blindly. People will always promise you how they care. But do not just believe their words; watch their actions. Do not hide things to please people. Live an open life and tell people the truth about what they need to know. Never hurt people by wasting their time. If you do not see anything working between you and them, tell them straight.

Ostrich’s spirit will always teach you that patience will make everything work out for you in the end. You might not know how they will work out right now but trust that your efforts will count someday. Do not be broken down by a few botched plans. They can only put you down temporarily but be strong always to pick up the pieces, rebuild yourself and move on.

Seeing an ostrich symbol in your dreams can also have symbolic meaning. While some people may think that this is some silly bird, there is much that even humans can learn from the creature. Keep reading to learn more about ostrich animal totem symbolism.