Snake And Horse Compatibility: Opposite Attraction

The two Chinese zodiac signs of the Snake and the Horse are very opposite in nature. Firstly, can their differences bring them together? Secondly, will their differences be what keeps them apart? Lastly, will understanding and compromise help this Snake and Horse compatibility in any way?

The Horse has a lot of energy and understands the importance of exercise. For example, they are restless by nature, very independent, and constantly going somewhere. At the same time, the Snake is far more domestic and can be somewhat lazy. They will probably lose their patience with the snakes when it comes to their more relaxing and laid-back lifestyle.

Snake Horse relationship has a bond that can break easily. These two are good at letting outside influencers or stories destroy the peace they have in their relationship. Their contrasting nature makes them forget about the promises they make for one another. They only smile at one another during a happy mood, but when the mood saddens, they keep to themselves. 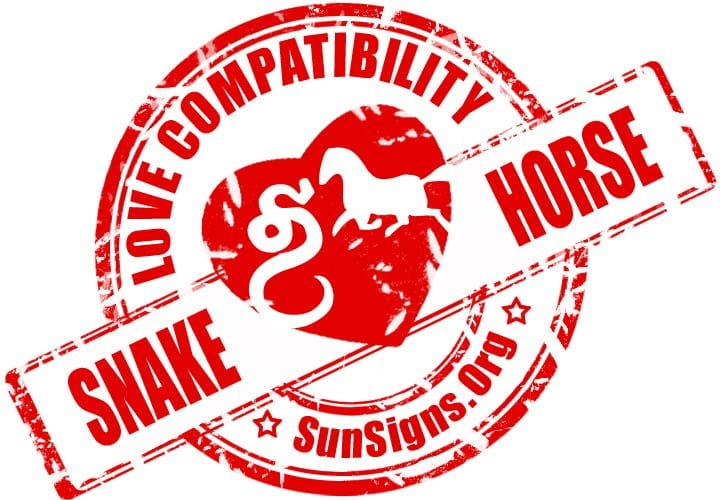 According to Chinese horoscope compatibility, the Snake and the Horse in love have very contrasting personalities. Their differences do not typically fit very well together. The love compatibility in a Snake Horse relationship is negligible, thus leading to a breakup sooner or later.

The Snake becomes frustrated and quickly tired of trying to make the Horse put roots down. They will have many disagreements in a romantic relationship. Of course, this is dependent on whether the Horse will even be around long enough for the two to find out that their personalities clash enough to argue.

Horse Snake in love easily brings anger at each other. Most of the time, their anger is covered by fake smiles to please others. These two might fall in love, but they will stop caring, respecting, and understanding each other after some time. At some point, they speak openly to their friends about the conflicts they have in their love life. One good thing is that the Horse cannot allow others to disrespect the Snake.

The Caring Nature Of Snake & Horse

The Snake man is attractive and sensual. They are almost always jealous and obsessive when in love. The Horse woman also has a sort of raw sex appeal, and these two might find they are highly appealing to each other at first. They will not be able to deal with the envious behavior of their partner.

According to Chinese astrology, the Snake and the Horse have incredibly varied personalities. Additionally, they tend to live in totally different worlds. Because of this, a Snake Horse friendship might not be perfect for either of them. The female Snake will see that the male Horse lacks responsibility. The Horse does not like the Snake’s somber and quiet attitude. They do not necessarily appreciate change. Both are very bright.

Snake and Horse Chinese compatibility indicates that these two can do opposite things that will benefit others. Despite their differences, they can put their efforts together and do something good for others. The connection between these two is sometimes difficult to understand. Their friends tend to understand them the way they are. The universe seems to have blessed them with an art of connection despite their differences.

The Horse male will never revenge against the Snake female for the wrongs that she might have committed. They both cherish their inner peace. Most of the time, they both work towards changing their hearts when one wrongs the other. To maintain their peace, they do not react to every action that is brought on them. These two try as much as they can to create peace in their home. They are always careful about what they say to their children.

When the Snake is dating the Horse, they will adore romance and will jump into new relationships. However, this tends to only last for a small amount of time. Eventually, the Horse will decide they want to move on to something or someone new. At the same time, the Snake can become rather attached fairly easily when in love.

Snake and Horse marriage compatibility is not so strong because they are not good at supporting or seeing the good in each other. They might give their best once in a while, but marriage needs consistency. Their marriage is likely to end because they are not eager to build it. They rarely go out or on vacation together.

To end, the Snake will dislike the Horse’s impulsive and egotistical nature. The Horse might think the Snake is too driven and advanced. In a Snake and Horse marriage, both will not be compatible either in love or sexually in bed, thus leading to a breakdown of their love match.

Snake and Horse friendship compatibility portrays a situation where friendship with benefit exists. These two only get together when they need help from each other. They have learned how to have a symbiotic relationship. They can spend time discussing how to help each other in life. These two always encourage each other to coexist as one, although their lives are different. 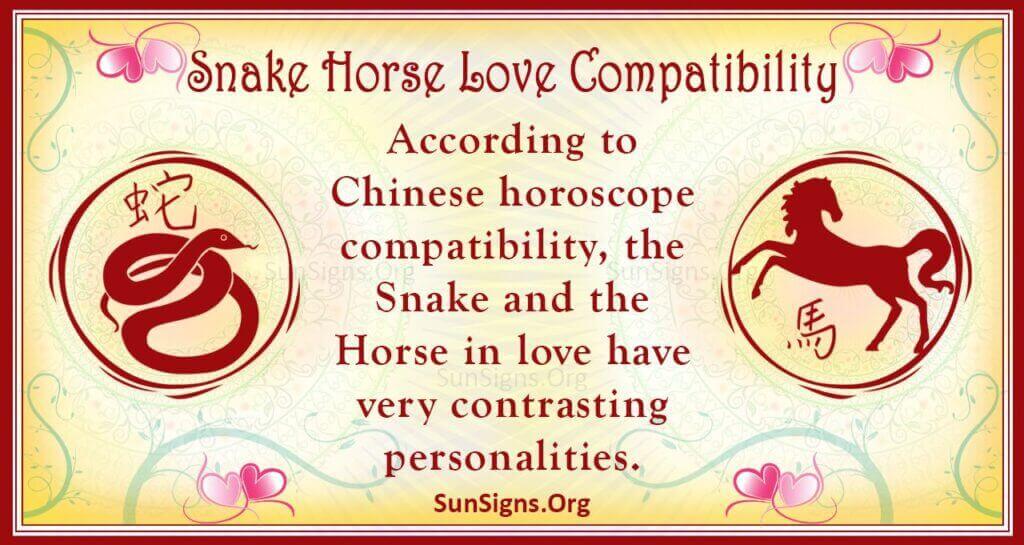 Chinese horoscope compatibility teaches that these two can still celebrate the achievements they attained together despite their differences. Horse man and Snake woman understand the importance of working as a team to achieve their common goals. They can put their differences aside and pursue a common course.

The male Snake is careful and focuses more on achievements in the long term. They will be very routine with their pursuits. At the same time, the female Horse is more concerned with doing things that make them happy presently. They are more erratic and unpredictable. They are somewhat moody and find independence in variety.