When a snake person is dating another snake, both will have comparable demeanor and attributes. Both of them will be able to communicate decently well with each other. They will be particularly good at communicating when they are discussing things that involve both of them. Both of them will find the other’s charisma appealing. They will both be somewhat self-sufficient and so they are less likely to be possessive of each other. 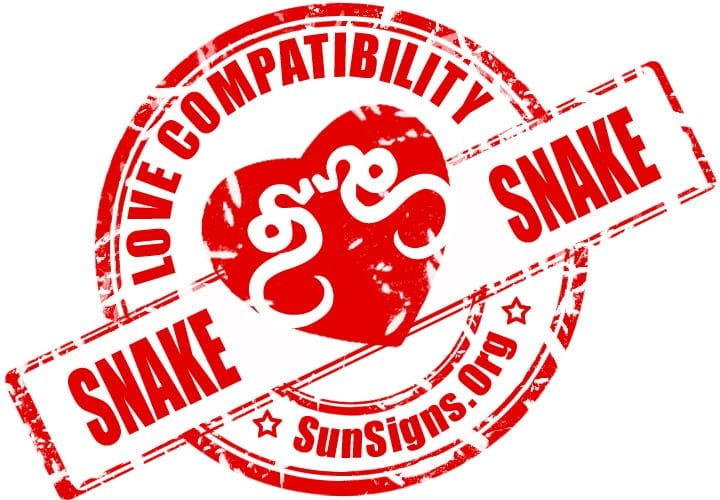 The snake-snake relationship can be satisfying for both of them. This is largely due to the fact that they have certain morals in common. The snake has an inner insecurity. Because of this, they value steadiness and a partner who is trustworthy. The two snakes soulmates together are capable of trusting each other and of forming a relationship that is steady. They can have more than enough fun together no matter what type of relationship they have.


The two snake couple can be extremely driven when going after something that they want. They will have the same motivation. Because of this, it will typically bring them closer together. They can achieve a lot of their goals together.

In a snake-snake friendship, they have certain qualities that fit well together whether they are friends or are in a romantic relationship.  Snakes are very well liked and charismatic. They are known for having a very interesting seductive quality. They will most likely find they are attracted to each other intensely and immediately. Sexually, the snake man and snake woman in bed will most definitely form a bond on a deep level. They are amazing at seduction and incredibly intelligent. They can be seen sometimes as mysterious and even dangerous.

When this Chinese astrology sign couple live together, their home life will be cozy and laid back. Even though the snake is extremely charming and well liked, they actually have a more reserved nature and prefer the comforts of home. They are usually envious and clingy. However, the snake snake marriage compatibility will be excellent. They might not have to be concerned about these feelings coming out. They make devoted and faithful partners. When they are in a relationship together, they are unlikely to cause either one to worry.

However, they might have trouble in fighting for the spotlight. They will have to work hard to make sure jealousy and possessiveness does not hurt their relationship and ruin their achievements for them. Typically when the male and female snakes are in a romantic relationship they will be so in love with each other that they will rarely have arguments or disagreements. So the breakup of this snake snake relationship is out of question.


The Chinese horoscope compatibility analysis shows that they will both be led by instincts and being so much alike their intuition should be very similar. This should help keep them focused on the same goals. There is a lot of potential for them to have really good relationship together. The snake people will just have to be less jealous of each other!