Snake Pig Chinese compatibility encourages teamwork as a way of making work easier. When these two are working together, it is easy for them to encourage each other to stand when they fall. These two are always cautious about the role that a third person plays in their relationship. They do not entertain a third person to bring enmity between them.

Pig Snake love relationship is fond of bringing up past things that fill their relationship with negative energy. These two can easily make each other angry. They might not appear to be angry at each other in public, but they dislike each other in their hearts. When one does the wrong thing in the relationship, it is not easy to let it pass easily. But most of the time, Pig man and Snake woman try to focus on what is ahead of them. They know that they have a lot to build together in their marriage. 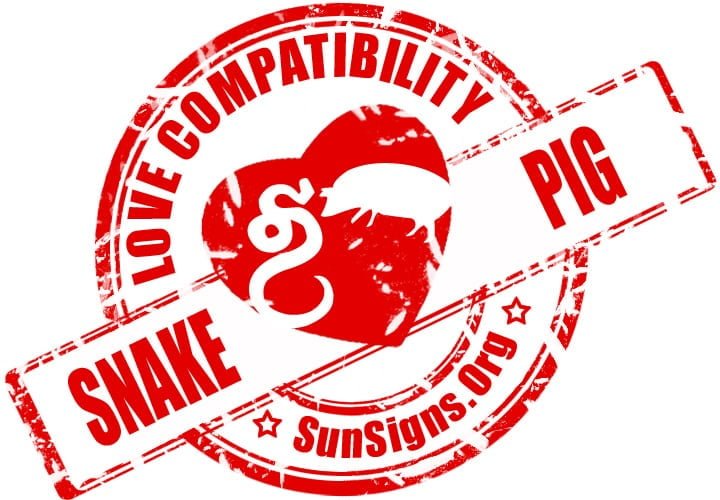 The two Chinese zodiac signs of the Snake and Pig seem to be enough alike that they would get along very well together. However, they do seem to have enough differences that they might end up arguing more than not.

In a Snake Pig relationship, both might have issues when it comes to communicating with each other effectively. The Snake will sometimes believe on instinct rather than on rational thought. They might have issues being more subjective than objective. Because of this, they might end up acting and argue in more subtle ways. The love compatibility in this zodiac match is very poor.

When the Pig is dating the Snake, they can be vicious in their retaliation if they feel they have been wronged. The Pigs are nearly always silent but generous people with a sense of honor.

The Caring Nature Of Snake & Pig

At the same time, the Snake man and Pig woman adore the chance to take it easy in surroundings that are lush and sophisticated. The male Snake is incredibly sexy and appealing. The female Pig is a fantastic lover. In bed, sexually, the Snake and Pig should bond very well over these traits.

According to Chinese astrology, the Snake woman can also be somewhat clingy due to their insecurities. Firstly, they will have a lot of willpower and be very motivated. Secondly, they will not find their partner attractive. Thirdly, they will not be impressed with the Pig man’s giving nature unless there is a reason behind it.

The Snake and Pig in love might be too different from being happy together. The Pig is usually fairly trusting in nature. Because of this, they will not see where the Snake is coming from with their doubts and complex thinking. They will be genuine with their partner, but the Snake will ultimately not care.

Snake and Pig Chinese compatibility are capable of loving themselves without interrupting anyone’s peace. These two can easily move on when they realize that they are no longer needed somewhere. They are so proud of themselves. They have realized that their self-respect should always be stronger than their feelings from the connection they have.

The Pig male will always show the Snake female that their life is better when they are together. These two are never fond of creating problems for each other, even when things are not good between them. If they get bored of each other, they do something they both find interesting to do. They spend time together to learn, to grow and to move on from their past lives.

The Pig is typically very devoted to their partners. At the same time, they can be mysterious sometimes, which might cause their partner to be suspicious. They are usually more laid back. Because of this, they will have a difficult time when it comes to accepting their partner. They will also not be able to encourage them to pursue their goals.

Snake and Pig marriage compatibility is filled with elements of forgiveness. When one spouse owns up to their mistakes, the other one listens and forgives them. The good thing with these two is that they do not move forward with the other person’s wrongs. They will always move into the future with a clear mind. They both have a soft spot in their hearts where they understand how good it is to forgive one another.

Snake man and Pig woman compatibility have room for improvement in the form of communication. For example, these two are eager to communicate better in their relationship. The Snake man can easily reach out to the Pig woman to know how she is doing. Above all, they are both open to communication, leading to reconciliation whenever they fight for their marriage.

In the Snake and Pig’s marriage, the Snake’s disinterest will inevitably cause the Pig’s feelings. As a result, this might ultimately result in a breakup. Opposites will not attract each other as the Snake Pig compatibility is negligible in this is a case. Certainly, there seems to be a minimal chance that these two could be happy together.

Snake and Pig friendship compatibility encourages them to rely on their friends for help whenever they reach a rock-bottom stage in life. These two know the importance of having true friends in their lives. They do not use their friends’ errors to blackmail them into doing things for them. These two are good at giving any trust that one needs from a friend. 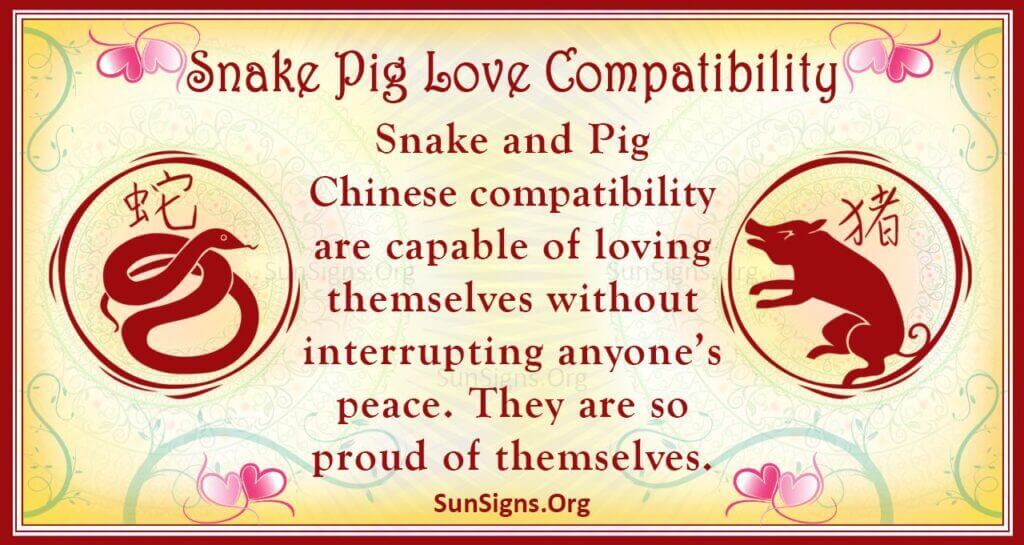 Chinese horoscope compatibility shows that Pig man and Snake woman have a lot to say about their lives together. Their friendship has made them understand that one can make a mistake. They have also learned not to allow one’s mistake to be bigger than the love they share.

In a Snake and Pig friendship, they will have many different things they are both interested in. Firstly, they both will be highly interested in having close friends, family, and comfortable domestic life. Secondly, they are also both somewhat sexy by nature. Thirdly, they both will be more than willing to put in hard work if and when they need to.