Symbolism is all around us, from the biggest animals to the smallest. The hermit crab might seem insignificant when compared to something like an elephant.

But their symbolism is just as large as any other animal you can think of. The different physical parts of the hermit crab animal totem, as well as its actions help to define its symbolism.


These two things, along with mythological background sometimes, can help to find the symbolism in nearly every animal. Symbolism is greater than the animal that is representative of it, and it might even make you appreciate these little animals even more. 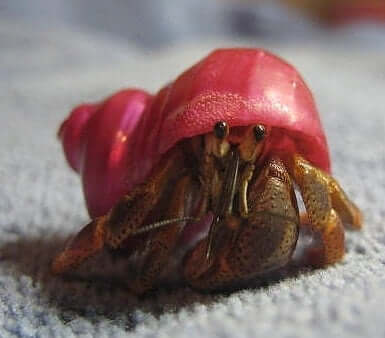 Hermit crabs are rather small when compared to some other species of crabs. While they still have some mighty pinching claws, they also have shells. The difference between their shells and the hard exteriors of other crabs is that the hermit crab’s shell does not grow with it.


As the hermit crab grows it needs to find a new shell to live in. They often use the discarded shells of dead snails or other animals that have decomposed and left their hard shell behind. The simple shell of the hermit crabs adds mountains of symbolism to the animal by itself.

Here are the general basics. Because the crab cannot make its own shell, and instead has to find it, this helps to symbolize scavenging or resourcefulness. The hermit crab doesn’t just wear its shell for show, it lives in its shell. This means that the hermit crab is always at home, no matter where it really is. This can symbolize a sense of belonging or comfort.

Another body part of the hermit crab animal spirit that adds a great deal to the small animal’s symbolism are its claws and the way that the hermit crab uses them. The hermit crab’s claws are sharp. They could easily cut anything that might want to attack the crab. Whether the hermit crab knows this or not, they usually choose not to use their claws to fight. If something large is coming at them, the hermit crab will retreat into its shell. After all, no one wants to eat a hard shell.

However, if the threat is small enough, the hermit crab spiritual totem won’t be afraid to fight back. This helps to symbolize picking your fights. Sometimes you are strong enough to fight off your enemies, other times you just need to hide and wait for the threat to pass. This also has to deal with the hermit crab’s symbolic trait of being patient. Who knows how long the predator will be waiting? If something in dangerous we need to be patient in waiting for it to pass, like a natural disaster or something else that we cannot control.

Lastly, the hermit crab symbol has some contradicting meanings within itself. For one thing, the hermit crab animal totem is anything but a hermit. Hermit crabs are extremely social animals, and love to be with their own kind. This obviously symbolizes communication and relationships. However, the hermit crab does value its alone time, and will retreat into its shell when it’s done socializing for the day. This helps to symbolize that even though relationships are great, it’s always important to spend some time alone so that we can rest and recharge for the next day.

The hermit crab spiritual guide may not look all that interesting, but hopefully this article on its symbolism helps you to appreciate this little animal even more. If you want to learn more about animal symbolism, or other kinds of symbolism, then you can read more articles like this one here on Sunsigns.Org!