There is nothing that is more pleasing when you know you and your partner are meant for each other. Rabbit and Snake compatibility form that kind of a relationship. Right from the time these two cross paths, they do believe they are destined for each other.

With regards to whether the Rabbit male Snake Female or Rabbit female Snake male can pair together as friends, it all comes down to their intuition. The year of the Snake compatibility is known for their intuitive nature. They have a strong belief system in what might happen, and this defines their lives in a big way.

That said, it’s worth mentioning that Rabbit Snake love compatibility will initially kick off as friends. Either the Rabbit or the Snake will be careful not to get into a serious relationship. Hence, it might take some time before things get on track. But they are a great match once things are aligned based on both their expectations.

Although the Rabbit Snake couple may not be the most preferred match according to the Chinese Zodiac, this is one that has a chance, so long as they use their similarities and their differences to their advantage.

The Rabbit Snake friendship will initially hit it off through a lively conversation. When they are dating each other, they will discover they have the same tastes, that is, the finer, usually more expensive tastes, in life. They will make plans for some upcoming play or to have dinner at a critically acclaimed restaurant they have both been dying to try. Yet sooner or later, both will gravitate towards the home, being the introverted beings they both are. 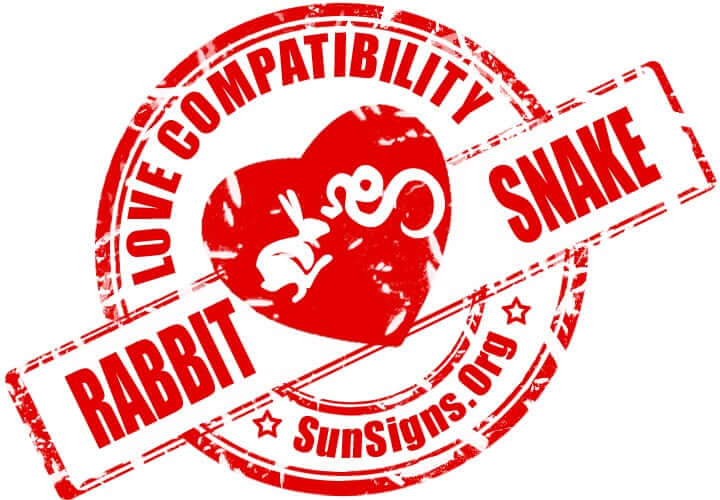 Rabbit Snake in a Relationship

The Rabbit Snake relationship has potential but will require dedication from both parties. The good thing is that both these Chinese astrology signs are very patient people. While the Snake loves to take its time carefully thinking, going over every possibility, intellectualizing them, often the Rabbit just dreams.

If they let their minds cross once in a while, the Snake might actually give the Rabbit a practical application to its many fantasies. They, in turn, will intellectualize their lover’s dreams, giving each other a smart perspective on their thoughts. The catch is that these two Chinese Zodiac signs both have to get out of their heads. Neither of them is known for their call to action.

That being said, the Rabbit Snake soulmates will most likely be quiet and reclusive, if the Rabbit lets the Snake have its way. They will be the ones who spend all their time together, opting for ordering dinner in, only double dating or attending parties at the request of the Rabbit.

This happens in relationships such as these because the Snake tends to absorb its lovers, often becoming rather jealous and demanding of them. If the Rabbit Snake love compatibility is strong, the Rabbit just might let this happen. They like to be cared for and nurtured. But if not, they just might run for the wind and break up. At the end of the day, Rabbits are independent signs and often shy away from such demanding lovers.

Another possible source of contention could be the lack of communication between these two. Snakes are secretive by nature. They are elusive with their feeling – and so are Rabbits. There could very well be something between the two, but they might not have any idea. Both have to be secure in the relationship before any true feelings come out. Even in bed, the Rabbit and Snake can sexually satisfy each other provided jealousy doesn’t come into the picture.

After that, the Snake will have no problem sharing, yet the Rabbit, on the other hand, may still hold out. These are two signs that are both quite insecure. And if one of them gets a whiff of something sour in the relationship, there could be problems.

The Rabbit man or Rabbit woman will start detaching itself, causing the Snake man or Snake woman to react rather possessively. And with that, they will most likely start looking elsewhere. For a Rabbit Snake marriage to work well, both must work on their own self-confidence, as well as their trust in their partner.

All things considered, the Rabbit male Snake female love match will flourish due to the many shared interests between the two. In each other, they will find good company and quite possibly a life companion, so long as the Snake is careful not to make too many demands on the Rabbit and overpower it.

Is Snake Compatible with Rabbit?

Well, Rabbit Snake in love might sound like a tough call to make. But it’s not. Right from their first meeting, these two might conclude that they are truly meant for each other. Partly, this is contributed by the Snake’s understanding nature. 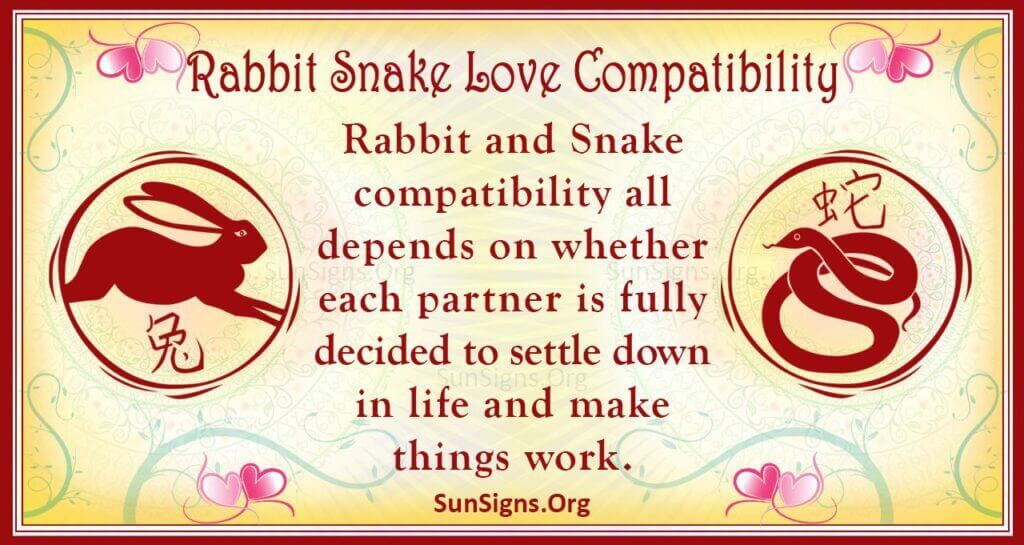 Is Rabbit Compatible with Snake?

Based on how sensual the Snake can get, the Rabbit will surely fall head over heels for the Snake. This is one aspect that will make their union stronger over the long haul.

Luckily, the male Snake is quite sensitive to the female Rabbit’s feelings, able to quickly notice when something’s awry. Good communication and practical thought will ensure success in this Chinese love match.

Generally, meeting in the middle is a prerequisite for the Rabbit Snake Chinese compatibility to work. While this might appear as something difficult to accomplish, the two can agree on something and ensure their relationship is based on what they truly believe in. So, Rabbit and Snake compatibility all depends on whether each partner is fully decided to settle down in life and make things work.