Love – it is perhaps the most universal expression that people are capable of. Fittingly, this means that there is a seemingly innumerable number of symbols and gestures that are connected with the concept. Probably as many as there are people who are feeling or have felt it. Whether you are looking at friendship, lustful and passionate love, or deep and unconditional love, the following symbols assist people in describing the most bold, yet elusive, emotion that we possess.

Love is overwhelming because of its vastness, and it can certainly be difficult to apply such broad concepts on a personal and individualistic level. However, symbolic meanings help us to capture pieces, bit and bit, and put them together to gain some understanding of the tumultuous journey that this feeling prompts. 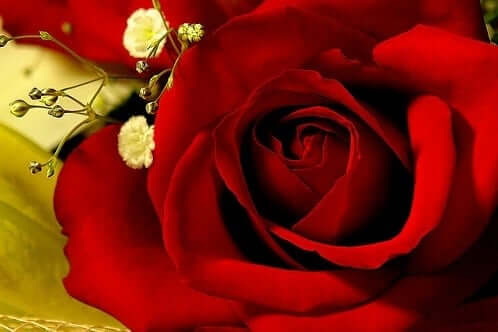 The most obvious and universal symbol of love should come as no surprise: the heart. It has long been recognized across cultures and time. Ancient alchemists used this symbol in matters of love and romance, while Roman Catholics recognized it as symbolic of the Sacred Heart (and love) of Jesus Christ. Graphically it is symbolized as an inverted triangle.


The heart symbol depicts a vessel that pours love and compassion. Christians interpreted this as the unconditional love of God the Father. The ancient Egyptians also used a triangle to symbolize a person’s capacity for love. In Buddhism, the Shri Yantra mandala features a triangle as a primary element, encouraging meditators to invoke the conscious energy of love.

Another popular symbol for love is the rose (especially ones of the red variety). This pure flower represents the sensual and romantic energies that flow through people of the Earth and have historical connotations to such. We hear of roses in use as far back as in ancient Greece and Rome, with strong connections to the goddesses of love, Aphrodite and Venus, who were revered for their beauty. Others lusted for them, which prompted the adoption of the belief in roses as symbols of passion and desire. The rose is also believed to be a symbol of physical perfection, making it an appropriate symbol of femininity, voluptuousness, and love.

Before doting men attempted to woo women with roses, though, apples were the gift of choice. This luscious and supple fruit was an ancient symbol of fertility and ecstasy. In the Bible, the apple was the fruit involved in the original sin of Adam and Eve. It also became recognized as a symbol of well-wishes to a long and loving union at weddings, mainly through its presence in the wedding of Zeus and Hera.

The god Dionysus also offered apples to the beautiful Aphrodite in attempt to woo her. Clearly, this juicy fruit was worth quite a bit. More literally, the physical aspects of the apple are symbolic, as well. When split apart, the two halves of an apple mirror images of the female vulva, making a direct and natural connection to femininity, fertility, and love.

The Greeks were enamored with the concept of love. As such, they want above and beyond the symbolic nature of the apple to recognize a special deity connected with love. Eros, more commonly known as Cupid, was the god of love born from the union of Aphrodite and Aries; the Romans referred to him as Amor, literally meaning “love”. In the past, Cupid symbolized the blindness of those in love. Nowadays, Cupid is believed to shoot arrows into people, causing them to fall deeply in love.

In addition to the above-mentioned symbols of love, there are more that are not so blatant, such as the maple leaf. Both the Chinese and Japanese view the maple leaf as an emblem of lovers, as did North American settlers. These settlers were known to place these leaves at the feet of their beds to encourage sexual abundance and pleasure. Storks, the “bringers of babies” have also been observed waving maple leaves into their nests. As a tree that emits a sweet, rich sap, it seems fitting that its leaves would symbolize the sweet richness of love.

Shells, on the other hand, are considered symbols of love for the opposite reason. Instead of being sweet and alluring, shell are hard and protective. This mirrors the protective quality that a person in love exerts. Additionally, several deities of love are often depicted with shells, such as as the Roman goddess Venus and the Hindu goddess Lakshmi.

These are just some of the many great symbols of love. They surround us in our daily lives and can be called upon to find new love, remind us to appreciate the one(s) we have, or assist us in mourning the ending of a great one. All we need to do is focus upon the loving energies that each of these symbols exude and our new journey can begin.