There are many animals that take to the sky on a daily basis. Bugs, bats, and other gliding animals can soar from tree to tree if needed. This article will focus on the symbolism surrounding some of the most popular flying animals, feathery birds.

This article will have a summary of the animal symbolism of five very different types of birds: blue jays, cardinals, finches, owls, and ravens. While all of these birds have many things in common, it is their differences that provide the most interesting bits of symbolic meanings.

The blue jay animal totem is a small blue and white bird, with a black beak and the same color legs and feet. The things that makes this bird stand out from the crowd is not only its vibrant color, but it’s chirp as well. Because of it’s color, the blue jay often symbolizes vibrancy and individuality.

However, the blue jay animal spirit is also very protective of its young. So it also symbolizes family, togetherness, as well as fearlessness and determination. Another way that the blue jay symbolizes family is that the bird mates for life. This also makes the bird signify faithfulness and endurance. Overall, this is a beautiful bird that also has some beautiful symbolism to go along with its looks. 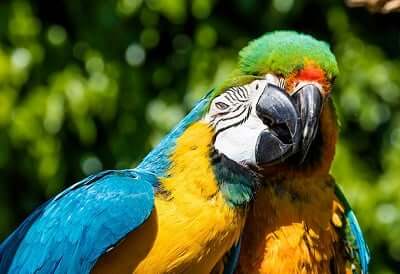 The cardinal animal totem is another brightly colored bird; the males of the species are red. The bird was named after the Catholic Cardinals, whose robes were the same color as the bird. This bird stood out because it was usually seen in the winter. It was a fiery dot of red feathers in an otherwise white and grey world. Red is a good color for this bird as it acts in a fiery and passionate way.

The cardinal is not afraid of a fight and it will defend its family if it has to. The brighter red the bird is, the more likely it is to mate as well, as the female birds are more attracted to brighter red males. Also, this bird has a wonderfully sing-songy tweet. It sounds almost like the bird is singing a joyful song. Because of all of these bird’s traits it makes a wonderful symbol for eternal energy, family, joy, ego and grace.

The owl animal totem is our bird of the night. Stalking its prey, it can see through darkness that many other birds would have trouble seeing through. Because of its nocturnal roamings, it’s no wonder that the owl is a symbol for mystery and secrecy. You never quite know what an owl animal spirit is thinking. Although some people many think that owls look spooky, and could be a symbol for scary things, the Native Americans thought differently.

The Native Americans thought that the bird was a wise creature, and that it knew more than it was saying. This is part of the reason why owls are are symbol for wisdom and intelligence. However, whatever they know they hide well, so they are masters and symbols of protection. People who have the owl as their totem animal claim to be wise, but also secretive.

The last brightly colored bird on our list, the finch animal guide, has a lot of happy symbolism around it. This may be because of it’s sunny yellow feathers. Some people say that this bird is a sign of good things to come. This bird is cute, chubby, and colorful. Just seeing it is sure to put anyone in a good mood. This is probably why this bird is a symbol for joy and happiness. This bird likes to fly around quickly and chirp sweet songs.

The songs are beautiful, which makes the finch a symbol for creativity. The bird itself just seems happy to be alive, and it seems like it wants others to be happy as well. The finch totem has an energetic air to it, which is why it is a symbol for energy. People who have the finch as their totem animal are usually joyful and energetic, and just generally excited about life.

Last on our list, the raven animal totem is a dark bird that is largely associated with spooky things. This could be largely because of Edgar Allan Poe’s story The Raven. However, many experts in animal symbolism say that the raven has nothing to do with omens of death and spookiness. Instead the raven is said to symbolize intelligence and mystery. While these birds do spend a lot of time around the carcasses, they only do it because ravens need to eat too.

Many mythology stories give the raven the part of the memory-holder, or secret-keeper. These birds were praised for their memory and grace. Although, the birds caw often, and were said to be poor at keeping secrets. This is why the bird is also a symbol for communication. Overall, don’t think of the raven as a symbol for death and despair, but think of it as a symbol for living things that talk and think.

Hopefully this article taught you something about the different kinds of symbolism that animals can have, even if they may seem similar on the outside. Symbolism goes much deeper than what’s on the surface, and hopefully you can learn something new from the symbolic meanings surrounding these birds.