Every day tattoos become more and more popular. Over the course of history there have been different fads in tattoos. There have also been times when tattoos weren’t seen as all that acceptable. They are slowly becoming more and more acceptable, which could be why more people are getting tattoos every year. With more people getting tattoos, people are looking for ways to make their tattoos more unique than the next guy.

One way to do this is to use ancient symbols for your tattoo. However, if you are going to do this then you should at least understand what the tattoo means. Of course,


it’s totally okay to get a tattoo just because it looks cool, but it’s cooler to be able to tell a story about your tattoo. This article will discuss a cool-looking symbol, the eye of Horus, and the symbolism and history behind it. 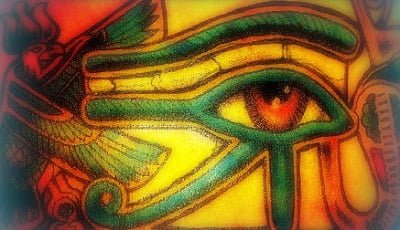 What Is The Eye Of Horus Symbol?


Many Egyptian Pharaohs (Kings) had their tombs lined with images of Horus. Horus was depicted in many different stories, but one stands out in particular when it comes of the eye of Horus. Once, Horus got into a fight with another god named Seth. Horus won the fight, but his left eye was left damaged. The myth says that this is why there are moon phases and not sun phases. This damaged left eye is sometimes called the “Wedjat Eye” or the eye of Horus.

Now lets discuss the Wedjat Eye’s symbolism. The eye by itself can symbolize the moon, as it was meant to thousands of years ago. Light and dark, day and night, masculine and feminine can all be found in Horus’ opposite eyes. The tear on the eye is a sign of the fight between Horus and Seth. This can symbolize aggression, fighting, and victory. Horus sacrificed his eye to take his rightful place among the gods. Lastly, the spiral in the eye can symbolize many things. Usually spirals represent expansion, growth, and creativity. Time, wisdom and mystery are also symbols of the spiral.

Overall, the eye of Horus is a pretty cool-looking symbol, but it has an even cooler history and symbolism behind it. To summarize the eye of Horus symbolism, it is a sign that shows imperfection, but also a willingness to fight for what’s right.

If you want to learn more about ancient symbols or cool tattoo designs, then you can read more articles like this one here on SunSigns.Org!