Ancient Celtic Symbols and their Meanings

The most spiritual Celts found symbolism in all things, whether living, non-living or completely unseen hence the presence of Celtic Symbols. Their culture has been famed for many centuries for the insightful outlooks that they have on typically overlooked things and events.

In addition to mimicking similar beliefs to other cultures and associating symbolism with plants, animals, and physical elements, the Celts designed their unique symbols to be featured on jewelry, mandalas, crafts, clothing, and more.

However, the true meanings of their symbols are sometimes hard to track because the Celts did not rely on written records. Much of the understanding that we have today comes from stories that have been orally passed down through time.

Also, historians and archaeologists are capable of deducing a lot of the meanings based on cave drawings, other artifacts, and pure intuition. Here, we will explore some of the most popular Celtic symbols and why they were created. 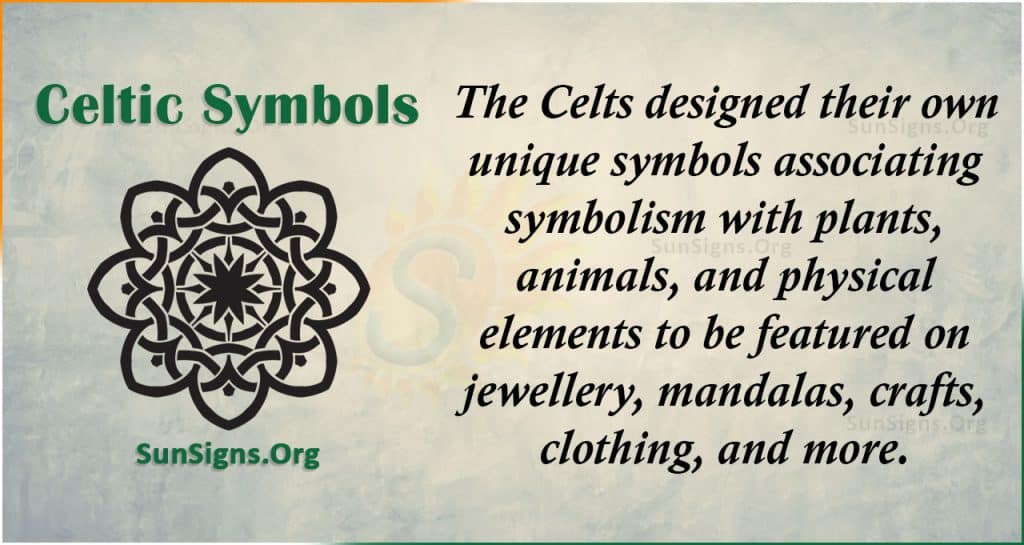 Celtic knots are endless paths that represent eternity and never-ending qualities such as love, loyalty, faith, and friendship, among others. Those knots with a single path which is repeatedly interwoven are metaphors for life and are known as love knots. Some of the Celtic knots are mention below.

This knot is a holy trinity knot that represents a parent and child embrace. It signifies Madonna and child. This symbol looks like two hearts that are made out of knotwork. One heart is lower than the other, and they are interwoven in an endless knot. This knot represents the love a mother has for her child and the bond that they share. Dots are added to the symbol to represent children. One dot is equivalent to one child. The dots can be placed anywhere near or around the motherhood symbol.

The Dara Knot forms part of Irish Symbols. The word dara derives from ‘doire’ which is an Irish word that means oak tree. This knot is in the form of the root system of an oak tree. The oak tree represents power, strength, wisdom, endurance, leadership, and destiny. The Dara knot signifies the connection we have with nature. Forming a relationship with nature gives us wisdom and insight.

Family love, strength, and unity are an expression of several Celtic Symbols. The Trinity Knot or Triquetra symbolizes unity, the trinity of soul, heart and mind and eternal spiritual life. It symbolizes the unity of the family unit and family love that endures forever and ever. The Claddagh ring represents love, unity, and loyalty, which are fundamental qualities of a family that enjoys peace, joy, and harmony.

Serch Bythol is a Celtic symbol for love which consists of two triskeles. It signifies true and everlasting love that a family unit shares. Mostly it applies to married couples since it means two people in love who are joined for eternity in body, mind, and spirit. 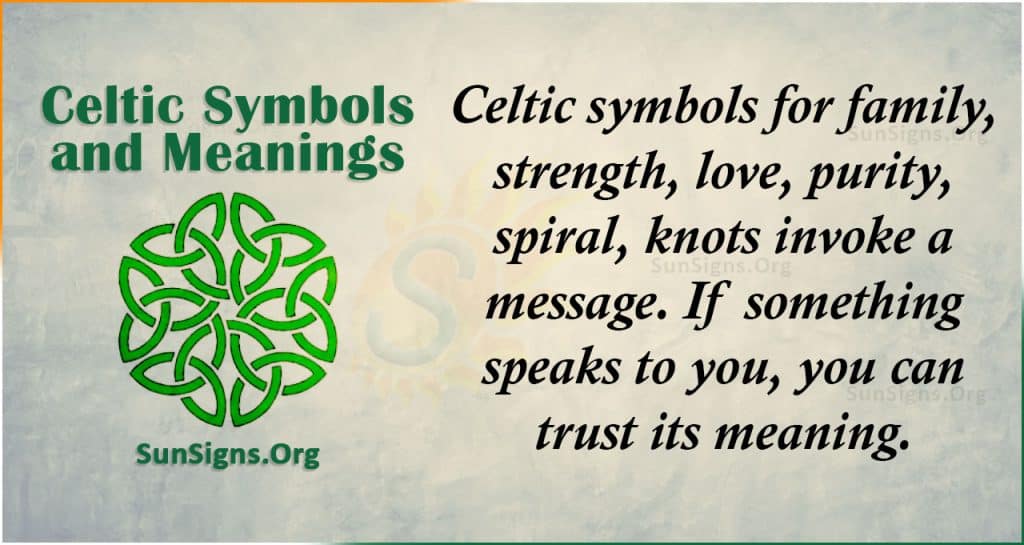 Importance Of Number 3 In Celtic Symbolism

First, it is important to note that the Celts held the number three as sacred. Thus, many of there symbols were designed around the concept of this number.

The Triskelion, meaning “three-legged,” is iconic for Celtic culture. With three legs jetting out to imitate running legs, this symbol was a masculine symbol typically standing for competition and physical progress.

The Arwen, or “three rays” symbol is another that follows this theme. The first and third rays are symbolic of male and female energy while the central ray serves to balance them- think yin and yang, Celtic style. 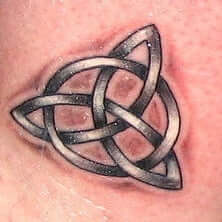 Finally, the triquetra is undoubtedly the most identifiable of the Celtic symbols of three. It is commonly referred to as the Trinity, for it always represents themes that come in trifold, such as mind, body, and spirit.

From a celestial standpoint, the triquetra signifies the three worlds: Other (for spirits, gods, and goddesses), Mortal (for humans, plants, and animals), and Celestial (for other unseen energies). As you can see, with the Celts, three wins.

Another common theme in Celtic symbolism is the spiral symbol, in various forms. When looked at quite literally, the spiral’s symbolic value focuses on its extending curvature. The outward growing is interpreted as the outward radiation of energy. 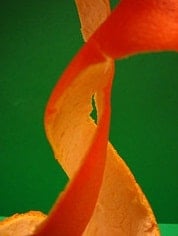 Depending on the perspective and intuition of the viewer, it could also be moving inward, toward the center point. Spirals come in different overall shapes. A single spiral is symbolic of growth, birth, and expanding consciousness and awareness.

A double spiral meaning, with curvature on both ends of the line, is symbolic of the balance all of us require to live happily, healthily, and mindfully; it also refers to the natural equinoxes that occur during the year.

To go even further, a triple spiral appears (you guessed it) as three lines, each with their spiral at the ending. Here, the powers and energy of the three phases of female life are represented: maiden, mother, and crone. Throughout the three phases, the feminine energies grow more powerful through growth and transition.

The Carolingian cross is a Celtic symbol that consists of four triquetras. The Carolingian Dynasty of France (Charles the Great or the Dynasty of Charlemagne) uses it mostly. According to Celtic meaning, this symbol represents unity, the eternity of God and balance. 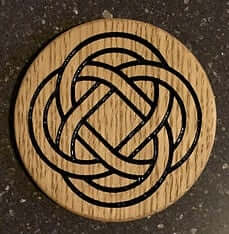 The circle is yet another commonality among Celtic symbols. They relied heavily on geometric combinations in their design of symbols. The never-ending circle is symbolic of eternity and the infinite. It also reminds us that everything in life grows through transitional cycles.

The circle meaning can stand alone or be incorporated into other symbols, like the Five-fold. As a pattern that signifies balance, the Five-fold is a combination of five circles. The four outer circles represent each of the four physical elements, while the middle circle unites them all. By pulling them all together, the central circle balances each of the elements out.

The Celtic Tree of Life, also known as the Crann Bethadh, is among many of the ancient Celtic symbols. It presents itself as a single tree trunk borne of roots below and stretching to the heavens with branches above it.  This Celtic symbol signifies all life on earth, that is, all life born on earth and which Universal Power sustains.

The tree of life connotes the kind of life we live as human beings. We cannot survive without the presence of each other and creation as a whole. We have a strong connection or bond with the nature that surrounds us. To understand ourselves better, we need to interact with nature intimately. The tree of life is a representation of the link between all life forms on the earth.

The Celts regarded trees as the center of life. They marveled at how the tree would thrive on air, water, and the soil below to remain green and feed both the omnivorous and herbivorous (including human beings). They, therefore, realized that without all the green around us, there would be no life.

The branches reaching up to the sky and the roots that firmly hold the ground are a symbolism of the connections between life on earth and the divine realm. Trees are still sacred to some cultures today since they provide shelter for birds, insects, crawling insects, among others. They also provide shelter to humans during times of extreme sunny conditions. The same trees provide us with the wood that we use as firewood and as timber to build our houses.

The Tree of Life in Christianity

Lastly, as religious people, the Celts had symbols that were connected to religion. After the arrival of Christianity, crosses could be found as an emblem on almost anything. They typically contain versions of the Celtic knot (another symbol of continuity and a representation of their rich history) in the middle and on the outward-reaching branches.

Celtic cross symbolizes a bridge between this life and what comes next, Earth and Heaven. At the crossroads on the cross, ring circles around to signify infinite love. Saint Patrick put the Celtic Cross in use to convert Druids to Christians. Druid symbols were and are still in usage in pagan worship. The sun and its life-giving power were essential to the pagans. Saint Patrick took note of this and decided to join the Christian cross with the Celtic Circle to come up with the Celtic cross. The Celtic Circle represents eternal life, while the Celtic cross represents faith.

As said before, no one can be entirely certain of the Celtic symbols’ meaning. While there is some concrete evidence for every emblem, your intuition and vision are what will be most beneficial to you. Use it and listen to yourself while invoking the message of Celtic symbols. If something speaks to you, you can trust its message, for it is for you and you alone.