Water on its own symbolizes many different things, from clarity, to mystery and even fertility. Many of the things that live in water share many of water’s own qualities and symbolism. Of course, animals are living things, and they can take on added meaning that simple water cannot.


While many of these animals have similarities to water and to each other, their differences bring along special and individualized symbolic meanings. Keep reading to learn about the water animal symbolism behind fish, dolphins, octopi, sharks and whales.

While the different species of fish have their own, and more specific, symbolism, fish in general share many of the same symbolic traits. Fish are a common food source for any sort of people that live near water. Because of how accessible fish are as a food source, they are symbolized heavily all over the world, even impacting religions and cultures.

In Christianity, the fish can symbolize abundance and transformation. In Pagan religions, the fish animal totem is more likely to symbolize fertility and the flow of the world. In many other cultures fish are seen as a sign of good luck. Many types of fish share this symbolism, and other symbolic traits depend on what kind of fish you are talking about. 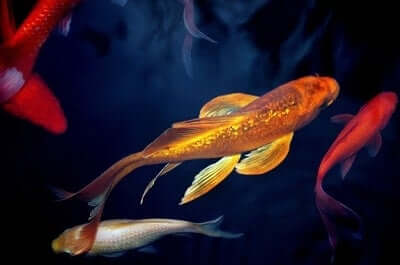 The octopus spirit totem is a strange and mysterious creature. Crawling along in the depths of the oceans on its eight legs, the octopus can wait for hours and then suddenly lunge at its prey. Some types of octopus can even change their color to blend into the scenery, making its own personal camouflage.

The octopus can even squirt ink at predators to defend itself and make a speedy escape. Because of all of these real-life traits of the octopus, the animal has inspired many symbolic traits for itself. This includes focus and patience, strategy, mystery, defense, intelligence and surprise.

Although many people may think that the dolphin animal spirit is just another fish in the sea, it is actually a mammal. The dolphin needs air to breathe, but it somehow still manages to live successfully in the ocean. There are many types of dolphins. The most popular dolphin that people often picture is the bottlenose dolphin. Dolphins often travel together, which associates them with the symbolism for family and community. They seem to have a language all their own as well, which is also a symbol for communication.

Dolphins move swiftly threw the water, swimming for hours at a time. This makes them symbols for endurance, but also grace. Dolphins are also fun and engaging, even playing with humans at times and making wonderful attractions at sea-animal parks. This makes them a sign for playfulness, but for intelligence as well. Overall, a dolphin is an animal totem with many symbols around it, but these are all symbols which they have earned.

The shark animal spirit is a calculating and fearsome creature of the deep. Many types of sharks must always keep swimming to survive. While this may be tiring and exhausting, they keep moving for years. With its sharp teeth and angular fins, the shark looks like a threat straight out of a horror movie, and has even starred in several of them. While inspiring films, the shark has also inspired some symbolism as well.

Sharks have been around for millions of years, which gives them the symbol for old and ancient times, as well as mystery. They are also symbols of  effectiveness, since they have evolved little since they have come into existence. The shark animal totem also symbolizes strength and endurance because it needs to keep moving. Speed, ferociousness, and instinct are also symbols for the shark. Overall, the look of the shark relates directly to the symbolism of the shark.

Lastly, we come to the whale animal totem. The largest animal on land or water, the whale is an imposing mammal. Like the dolphin, the whale needs air to live, but is able to live in the water. Even if the whale had feet instead of fins, it would likely have a hard time moving around on land because it is so large. No matter the age of the whale, it tends to look very old and wrinkly. This gives the whale the symbols for wisdom, understanding and age.

The whale songs carry through the air and seas for miles, even being recorded and sold on CDs. This brings along the symbol of communication and creativity. Some cultures incorporate the whale into creation symbols because of its size and old appearance. so this makes the whale a creative and religious symbol. In general, you could think of the whale like an old grandparent, wise, creative, but also old and slow-going.

While this article is a general summary of some of the animals that have live in the water and have many of the same symbolic meanings as the water, there are many more water animals that share this symbolism as well. Also, the animals on this list have many species to them, many of which have different meanings to them. Symbolism is in every animal, and this is part of what keeps life interesting and exciting.