The native North American zodiac signs have been with us for about 5000 years. The native system is designed to gain the most advantage from the biorhythms of life. From this root comes the development of the North American astrology horoscope.

The calendar developed by the Mesoamericans is possibly the most accurate that exists, and it was designed to bring harmony between life and natural events. The Native American Astrology Zodiac Reading will provide you your animal sign in less than a minute.

The Native American astrology reading provides an opportunity to do an interpretation of your sign in the Mesoamerican zodiac. It will show the good and bad traits of each sign, your best color choices, your lucky stone, the most favorable tree for you, the best time of day, the element, the animal totem, and how well you will get along with other signs. So there is quite a bit of information contained within the reading.

The Native Americans developed a system of earth-based astrology. There are 12 signs in the year each named after a specific animal. These would be the animal guides that we often hear of in relation to the North American natives. Not only do the animals representing the signs guide, but they also teach some of the essential lessons of life.

Perhaps it is true that some of the myths and legends convey lessons better than parents to their children. Also culturally many of the story songs and myths are not heavy-handed. The lesson is often presented through humor, and the use of the animals can make it seem less insulting to the person being reminded of a flaw he need to correct. 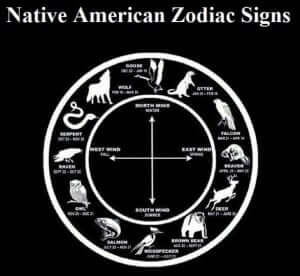 As most of North American native mythology and storytelling is based on animal characters, the zodiac signs are also based on animals. They are convinced that animals are teachers of life lessons to the young and so the zodiac was created using animal guides.

Various traits of the animals involved will be seen among those born under their sign. The animal representatives are: Goose, Offer, Wolf, Hawk, Beaver, Elk, Woodpecker, Salmon, Bear, Raven/Chrome, Snake And Owl.

In 2017 amongst the North American native people, there is still a great belief in the totemic animals. While many do not live the full hunter gatherer lifestyle, in general they have a stronger connection to the land than North Americans.

There is in some circles a revival of some of the spiritual rituals that would have enriched the North American native culture. So, for some, knowing their animal sign has become very important.